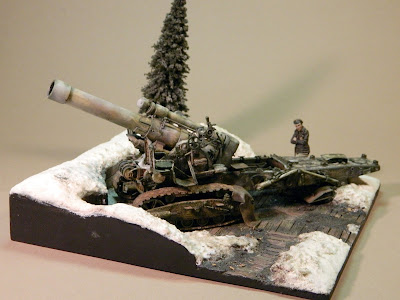 This is Trumpeter's 1/35 B-4 203mm howitzer modified to be a B-5 280mm mortar. Like it's smaller counterpart, the B-5 mortar was manufactured in Leningrad at the Barrikady factory. Both weapons became infamous during the Winter War between Finland and the Soviet Union, where the Soviet artillery earned the nickname "Stalin's Sledgehammer." I decided to convert the kit to this rare variant because, as a teenager, I am very impatient and I didn't feel like waiting for my RB Barrel replacement gun to come in the mail. Also, my Dad was working on a Leopold railgun at the time, and I simply couldn't let him have the bigger gun. 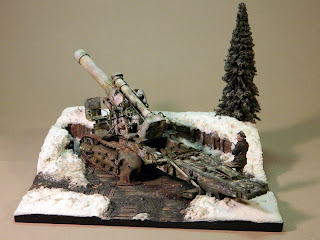 The barrel was made using steel tubing and modified kit parts. I replaced the plastic seats with thin aluminum sheets bent to shape, and added bolts using rivets from the model train detailing area of the local hobby shop. I attached the plastic rivets to the aluminum using Future floor wax. I combined the photoetched rifling included in the kit with the rifling from a second B-4 kit to add some detail to the massive gun. 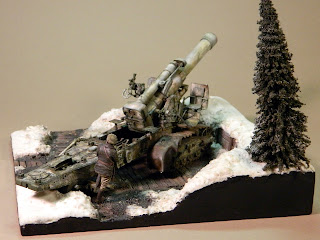 I used a roughly 70:30 mix of Tamiya Nato Green and Yellow Green as a basecoat for the standard 4BO protective green that was applied to nearly all Soviet military vehicles of the era. I then lightly airbrushed areas with Tamiya Flat White. Using the 'mapping' technique described in Mig Jiminez's FAQ book, I applied chips and flakes of white paint. Several thin filters of Winsor-Newton brown, green, and blue oil paints helped bring out detail and vary the color. To cover the massive gaps where the tracks meet,(Yes, I admit it!) I added two tarps, made by rolling thin sheets of Apoxie-Sculpt with a hobby knife. 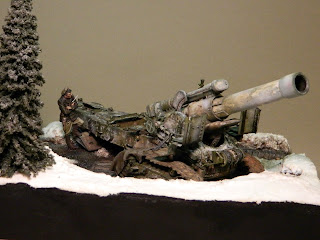 The snow is a mixture of micro-balloons, white paint, white glue, baking soda, and clear gloss. I applied very thin washes of brown oil paint to represent dirty snow, and I covered some areas of snow with white glue to represent slushy snow. Living in Minnesota, I have plenty of first-hand experience with the stuff and I knew I couldn't let myself take any short-cuts on the snow. 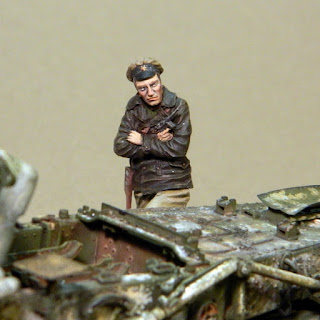 The figure is from Evolution miniatures, and he was finished using oils over acrylics. I can't say enough good things about Evolution's figures, they are some of the best sculpts and easiest kits I have ever seen. This figure came with a total of 2 parts... that's right, just two. The Mauser pistol was molded separately, that's all! 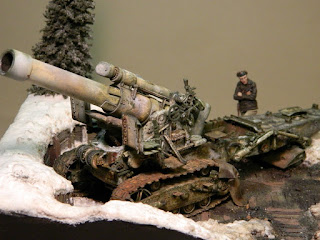 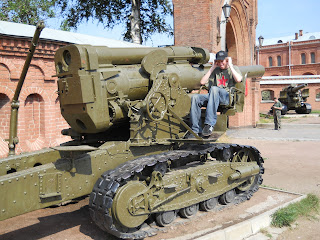 During my visit to the artillery museum in St. Petersburg in 2010, I got to see the B-5's "little" brother, the B-4. It is a truly massive abomination.
I appreciate any comments and criticism!
Labels: 1/35, Artillery and SPG's, Figures, Great Patriotic War, Vignettes, Weathering, Winter War