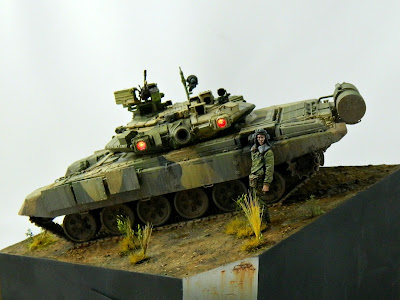 I've finally finished off my T-90A from Zvezda in 1/35. Apart from the modifications I made to the "Shtora-1" dazzler lights, I also used a metal barrel from RB Model, brass smoke launchers from Model Point, and screens from the Tamiya T-72 kit. I also used brass wire to replace a few grabhandles, made new handles for the KORD 12.7mm machinegun's ammo boxes, and sculpted a new mantlet cover from Apoxie Sculpt. I opened up the driver's hatch and boxed in the empty hole, and drilled out the KORD's barrel. The figure is from Evolution Miniatures. 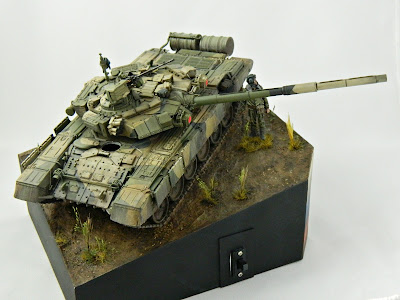 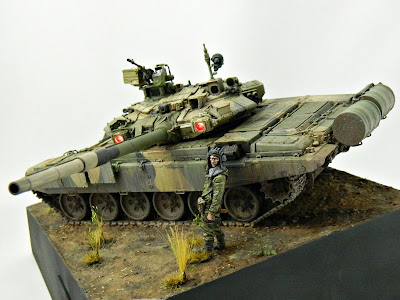 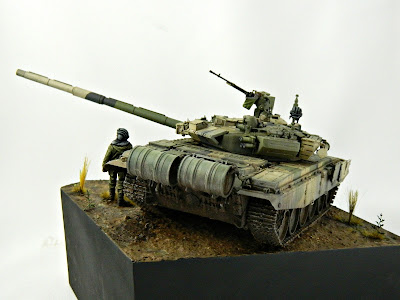 One of the trickier parts of finishing this kit was assembling the hull in upper and lower halves in order to facilitate painting of the tracks and running gear underneath the sideskirts. In other words, I left the lower hull "tub" (complete with the wheels, tracks, and suspension) separate from the upper hull (the turret ring, front glacis plate, roof, engine deck, and skirts.) I only joined the two halves after I had painted both halves and weathered the bottom, which is different from my normal sequence of painting and weathering the entire vehicle in unanimous steps. This was definitely a learning experience, because I had to do some leap-frogging around to get all the parts of the tank to look coherent with one another. 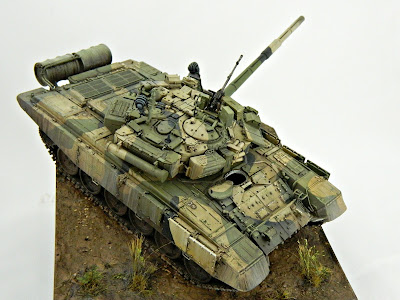 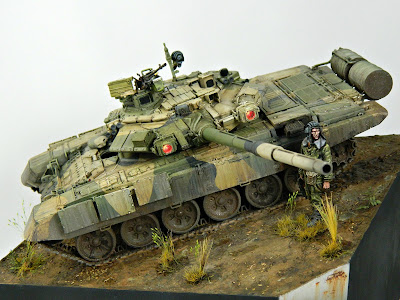 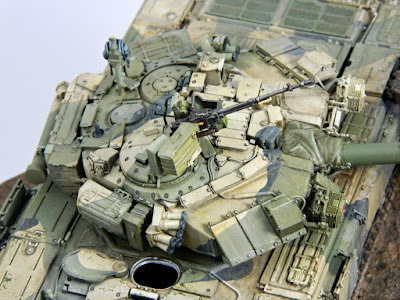 I airbrushed Tamiya paints and used Silly Putty to mask the hard-edged pattern of the camoflage . Over a coat of primer, I first airbrushed XF-55 Deck Tan over the whole tank. I then sprayed some white along some prominent edges to mimic the "color modulation" technique that has become popular in the past months. (I really like how this modulation effect looks on other people's models, but it is usually too dramatic for my taste; I therefore decided to keep it very subtle on my T-90A.) After applyinig the Silly Putty mask, I sprayed a mixture of XF-74 Olive Drab JGSDF and XF-64 Field Grey, which I later lightened with white paint and sprayed along the edges once more. Another round of Silly Putty masking and a bit of XF-63 German Grey finished off the camo scheme. I used plenty of oil paints, pigments, and AK Interactive products for the weathering. 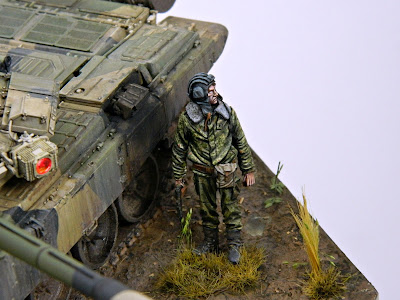 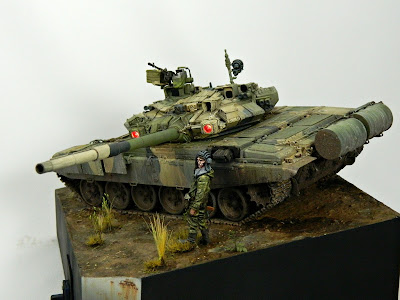 The figure was painted with Winsor-Newton oil paints over acrylic basecoats. I did a fair amount of searching in hopes of finding some photos of a T-90 tank crewman that wasn't wearing the new Russian digital camoflage, but I was unsuccessful. I tried to replicate this uniform from hell as best I could, using lots and lots of tiny dots. I'm happy with the results, but it took way too long, and I'm not looking forward to doing it again.

I'm pretty happy with the overall results, but I'm even happier to be finished. Onwards, to the next project! Thanks for looking!
Labels: 1/35, Armored Vehicles, Figures, Russian Federation, T-90A