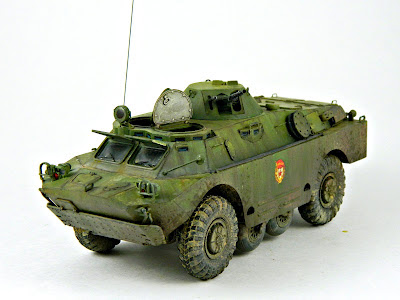 Every so often I like to throw a kit together really quickly and just finish it without concerning myself with historical accuracy and contest-worthiness. The 1/35 BRDM-2 (Early Version) from Trumpeter was the perfect opprotunity to do just that. I replaced the barrel with one from RB Model, and replaced the windows with acetate, later adding photo-etched windshield wipers. Aside from that, the kit was not modified. 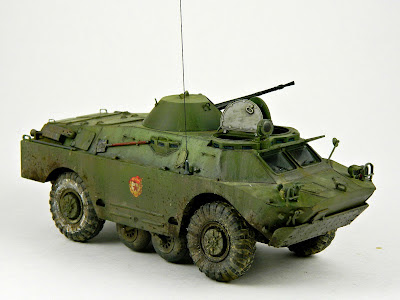 Trumpeter includes a nice fighting compartment, but almost all of it is invisible when the hull is glued together. I was surprised to learn that the BRDM-2 series, as well as the similar turrets on BTR-60 vehicles, didn't have a hatch! The turret has plenty of detail and photo-etch for the 14.5mm gun, but it's totally hidden. Even an "IPMS Death Ray" (pen light) won't be able to reach most of it through the two small hatches. Therefore, I overlooked most of the ejector-pin marks and gaps on the inside and focused my attention on the radios and instrument panels that line each side of the interior. 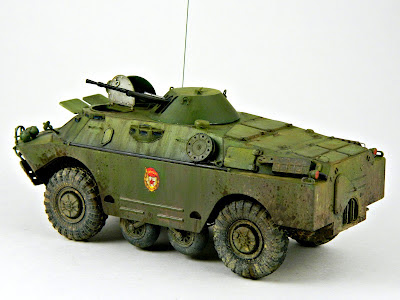 I kept paint chipping to an absolute minimum on this vehicle, instead focusing on mud and other streaking effects. I primarily used artist's oils for the fading and streaking of the green paint, and AK Interactive earth-colored enamels and Mig pigment washes for the dust and mud. 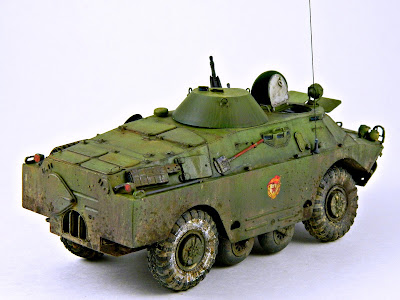 I made one of the wheels to have whitewalls, representing a spare tire from a parade vehicle. I applied the kit's decals over a cocktail of various Tamiya acrylic paints. 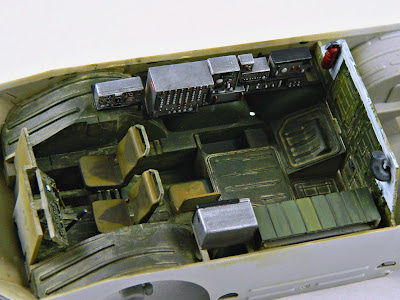 Almost none of the interior is visible once covered, so I didn't sweat the details. The lower half of the fighting compartment was painted with the same green as the exterior, while the top half and roof were painted in a white or ivory color.  I was unable to track down any photos of the real radio station, so I sorta "winged it" and imitated other Soviet-era electronics. I placed some spare information placards from Archer in the most visible areas for some extra visual interest.

I have posted a step-by-step article on how I used oil paints to weather this model, which can be viewed here.