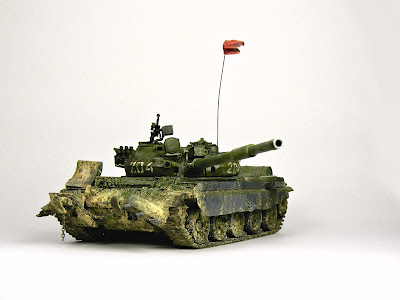 Here is my T-62M tank model from Trumpeter, fitted with a KMT-6 mine plough by Skif. They come together to represent a vehicle in the Red Army during the Soviet's war in Afghanistan during the 1980's.
I didn't use any aftermarket sets for the model, but I did improve a few parts with foil, nuts & bolts, spare parts, and a few scratch-built details. To name a few, I added fuel lines to the gas tanks, bent up the rubber skirts, and added some empty slat armor racks to the back of the turret. I also made a banner for the whip aerial using Apoxie Sculpt and placed two ammo box straps from the spare parts bin to the loader's side of the turret. Essentially all of the detailing on the mine plough is now all but invisible under the layers of mud. 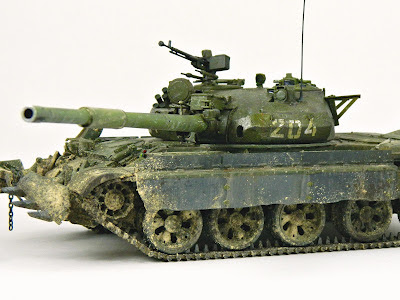 I was really inspired by the stunning work of Ikjai Ahn, especially with his T-62 model 1968. You can see this model in the Track-Link gallery, or view larger images on his website. 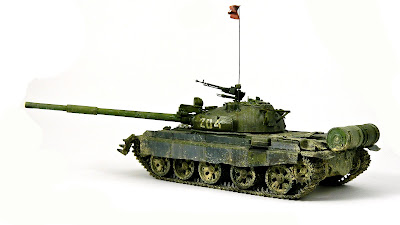 I found a plethora of photos online of the T-62M variant in action in Afghanistan and I loosely based this model on a handful of different vehicles. I was really interested in replicating the contrast between the dull earth and dust tones and the shiney cast steel. My intent was to have contrast not just between light and dark colors, but also between matte and glossy  sheens. 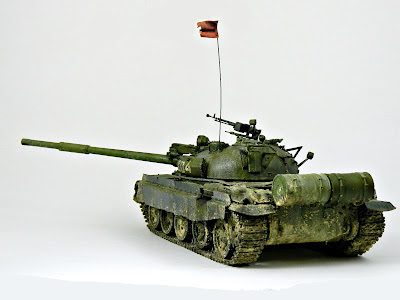 I placed a tarp over the left rear fender to cover up an unsightly glue blob. (Yes, I admit it.) A spent shell casing from Miniart's 122mm ammo set was placed on the tarp to add a small splash of color. To me, the 122mm shell is close enough to the 115mm ammo used by the T-62. The shape is a little different, but I'm not going to lose any sleep over it. 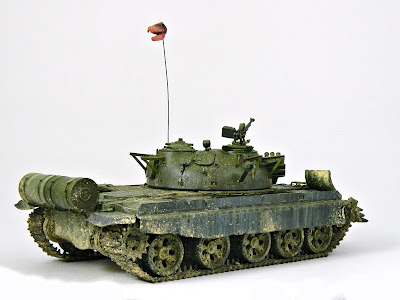 I saw plenty of photos and videos showing T-62's with their front fenders slipping loose from the torsion bar that holds them in place and flopping around like the white flags of surrendering imperialist pit vipers. 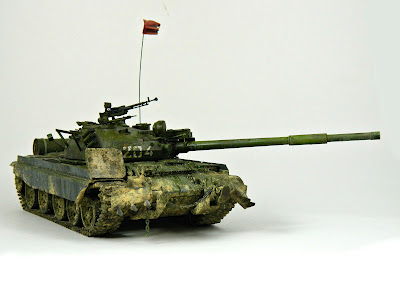 Mine ploughs are awesome. Don't even try to disagree. 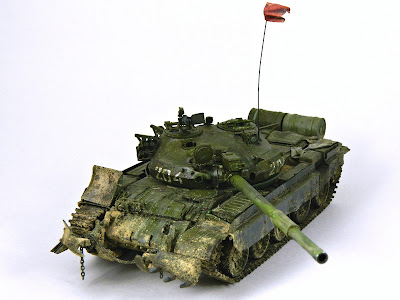 The mud was made by mixing plaster with AK Interactive Kursk Earth and Afrika Dust paints, and splattering the mixture onto the model with bursts of air from the airbrush. I used Vallejo Field Green for the main camouflage, but after liberal applications of filters and washes, the color is very different from the original. 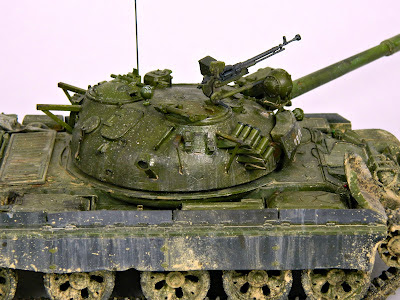 From what I could tell from photos, T-62M vehicles were either fitted with rubber side skirts or turret and hull slat armor; never both. So, to give the turret a little extra something, I added the mounting brackets that hold the slats, and skipped the hard work of scratchbuilding the slats themselves. Everybody wins! 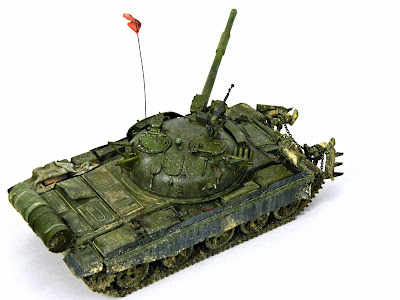 From this angle, the most prominent differences between the T-54/55 tanks and the T-62 can be seen most clearly: the longer engine deck and hull, the homogenous one-piece turret casting, the wider wheel spacing and the centrally located barrel fume extractor are all visible.

Thanks for looking! All honest feedback and comments are greatly appreciated!