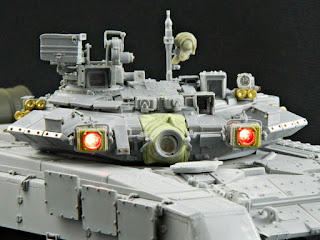 For the past month I've been very busy assembling Zvezda's T-90 main battle tank (MBT).  The T-90 is the ultimate evolution of the former Soviet Red Army's T-72, the MBT famous for its rugged mobility and low silhouette. One of the most notable additions to the T-90 is its countermeasure suite, known as "Shtora-1." The system incorperates an array of sensors that can detect lasers emitted from anti-tank targeting systems, and can use smoke grenades or various jamming techniques to defend itself. The Russians insist that it works, but the West insists that it is out-dated and innefective; realistically we won't know the truth for a few decades, but for the time being the Shtora-1 system is undeniably an interesting looking system. 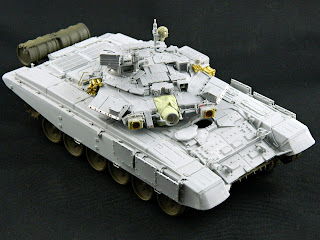 My favorite feature of the Shtora-1 suite is the infra-red scramblers. They emit a dull red-orange glow that is blinding to IR cameras used in some anti-tank weapons. These lights are situated on either side of the T-90's 125mm L/48 cannon. They kinda remind me of the Hypnotoad from Futurama. Anyways, enough tank jargon; on to the model.

I inserted the smallest LED lights I could find into the IR defense modules on either side of the cannon.  I had to modify the delicate kit parts with strips of plastic to make room for the lights, and I also painted the inside of the boxes with a metallic orange paint. The LEDs are powered by two AA batteries that are eventually going to sit underneath the tank in a wooden base. The wires still protrude out the back of the IR boxes and into the turret, and unfortunately they are still visible... I'm trying to figure out a way to hide them, either with some camo netting or foliage.
I'll begin painting as soon as I finish wrestling with the photoetched parts on RB Model's metal barrel. I'm also going to add a few extra wires on the turret electronics.
Labels: 1/35, Armored Vehicles, Russian Federation, T-90A