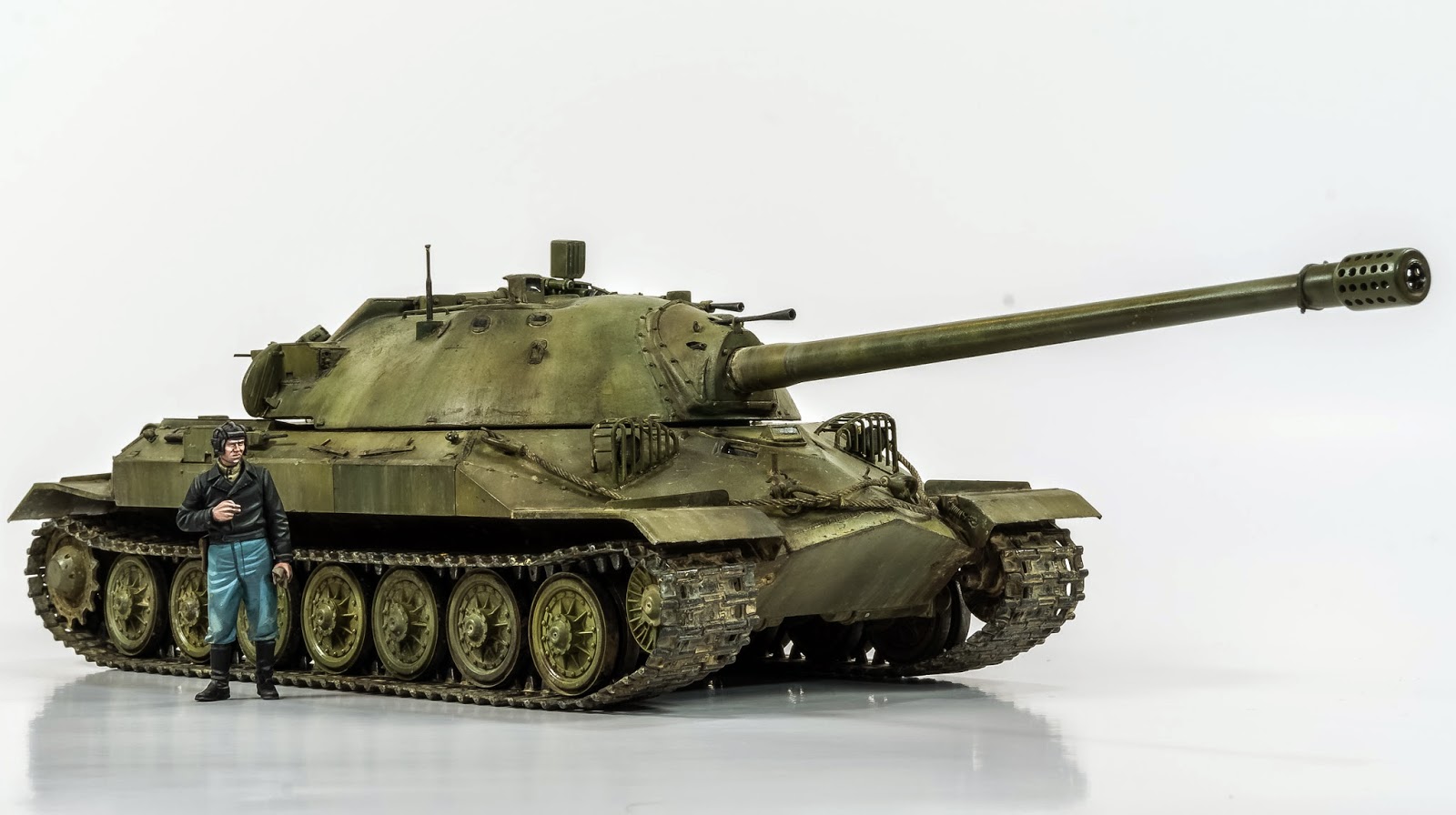 Trumpeter will be the death of me. They just keep on releasing all the subjects I really want! Case and point: the IS-7 heavy tank, the heaviest tank ever built by the Soviet Union. As stated, it is the Trumpeter 1/35th scale kit, which I built without any aftermarket additions (there are none available at the time of construction). The figure is from Tristar, and was painted with acrylics. I added more details than I usually do on this model, thanks in part to a good-natured father/son tandem build of the same subject. I'll post some photos of his work in a few days, but for now, we'll have to do with just mine. 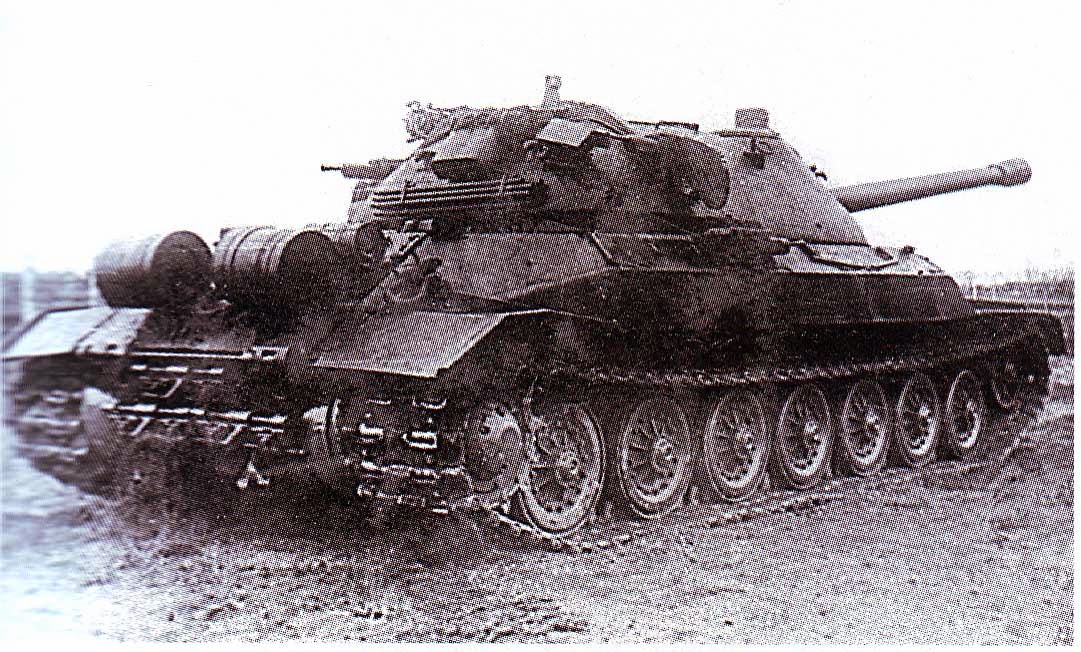 I found these two pictures of what I assume is the same vehicle, and based my model on it. I liked the way the anti-aircraft gun on the turret was stowed in the folded position, and the spare track links were unique as far as I can tell. 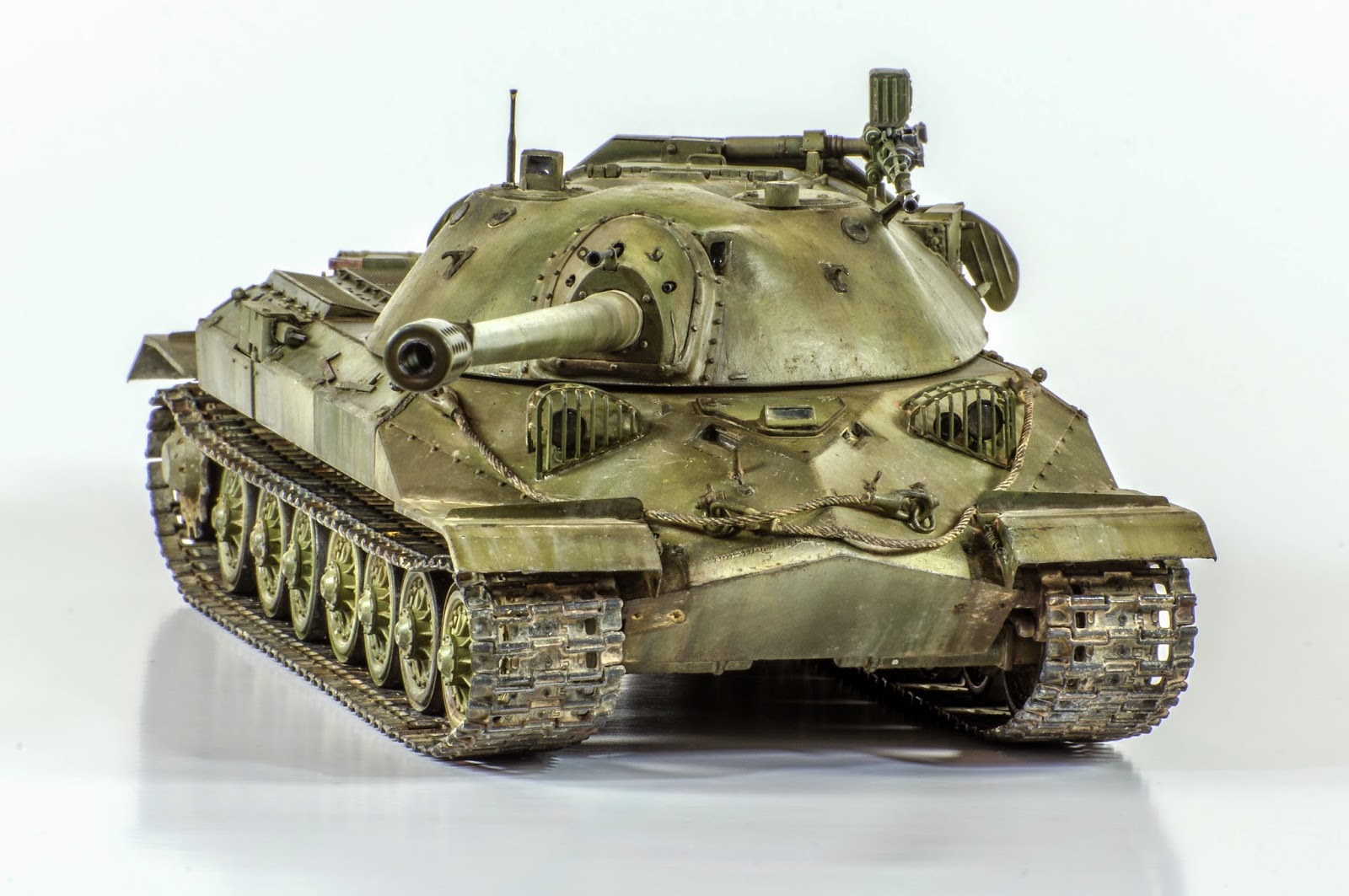 The IS-7 is the perfect example of a concept that is fantastic on paper but fatally flawed in practice. Introduced as a prototype in 1948, the IS-7 was one of Kotin's last designs before his "promotion" into bureaucratic obscurity. Statistically, the IS-7 was the most fearsome tank in the world: Its frontal armor was impenetrable even by the German 12.8cm anti-tank gun, its top speed was higher than most medium tanks, and it mounted a 130mm cannon, which was nearly 50% larger than its approximate Western counterpart in the M26 Pershing's 90mm cannon. Ammunition for the tank's main gun was stored throughout the tank, but a rotating canister akin to a rotisserie held a set of rounds behind the gun, ready to be slid into the breech with minimal relative effort. Oh, and it has six 7.62mm machine guns, plus two 14.5mm heavy machine guns. The 7's design was extremely ambitious, but it came at a cost. 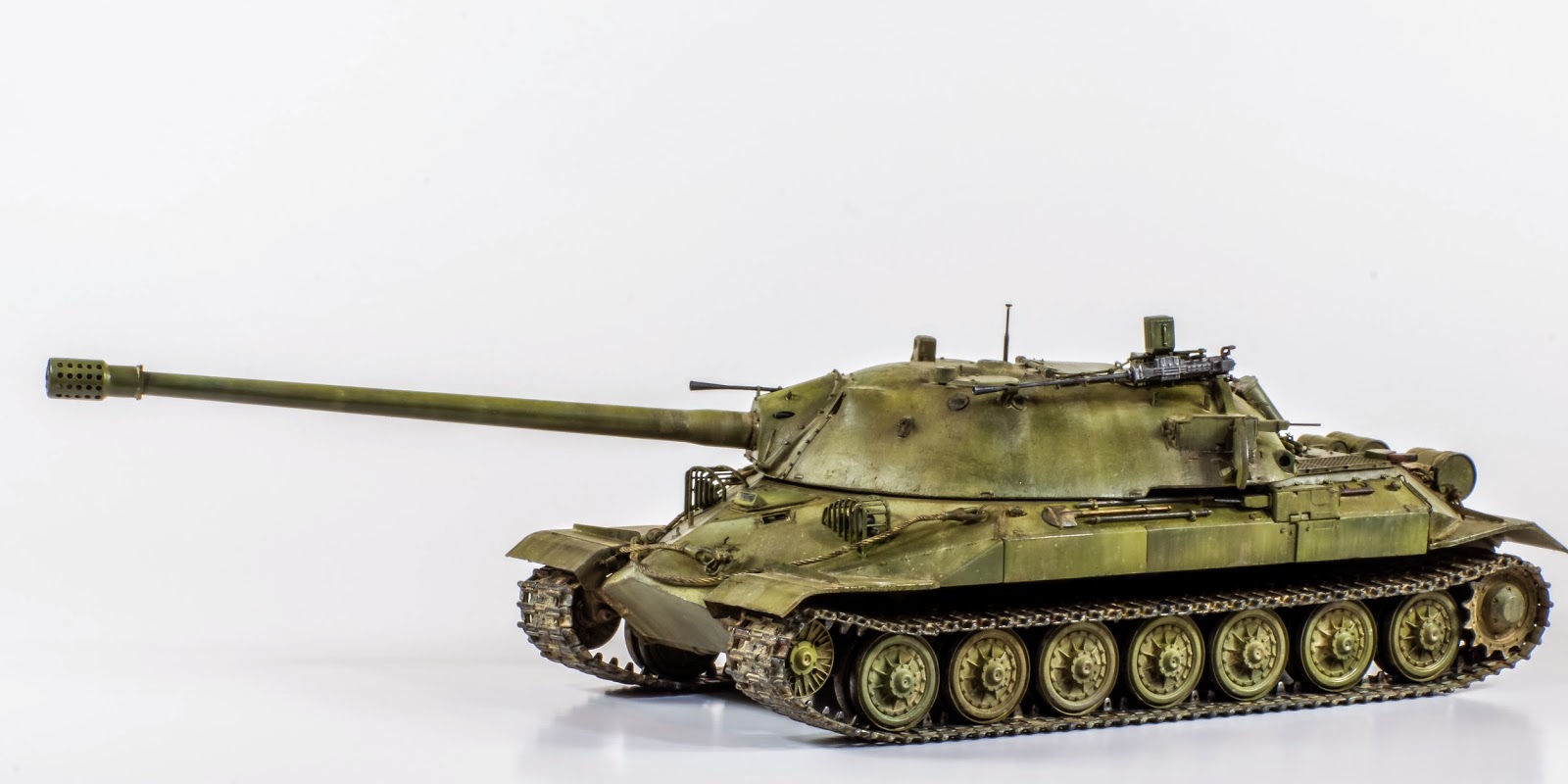 The problems that plagued the IS-7 were numerous and fatal. The crews reportedly hated the layout. Four of the six 7.62mm machine guns are fixed in position, two facing forward on the hull and two facing backwards on the rear of the turret. There is no way to reload any of these guns from inside the tank, and the turret's rear guns have absolutely no periscopes for aiming. The three co-ax machine guns in the mantlet are needlessly redundant, and logistically the tank uses too many different types of ammunition. Like almost every heavy tank from Kotin's desk, the transmission was prone to breakdowns.Somewhat predictably, the tank was very overweight and would have been too heavy for many of Russia's rural bridges, much like the IS-4 heavy tank. This was the most damning issue, as the Soviets were well aware of the German's logistical woes with their effective yet overweight heavy tanks. 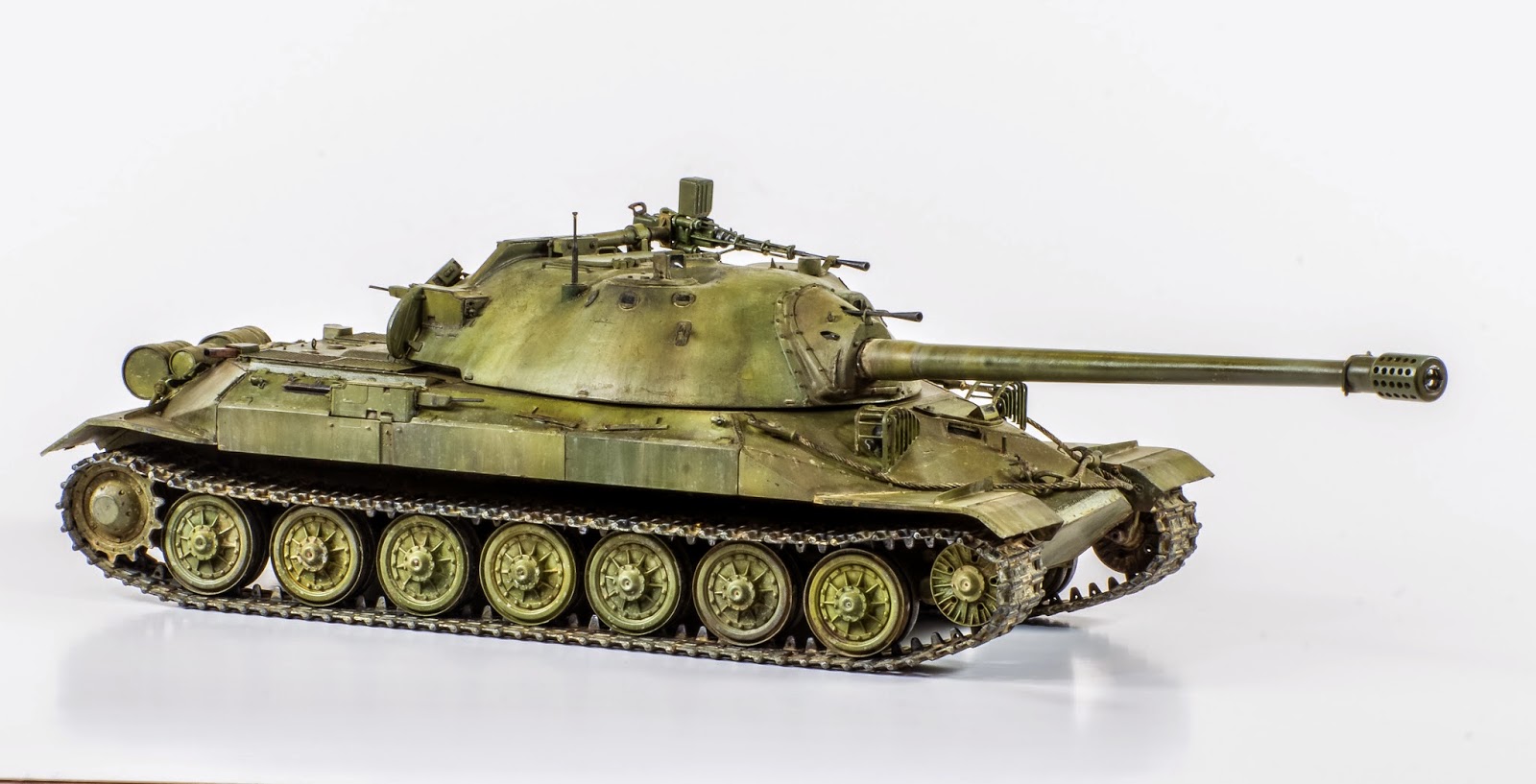 I used the leftover mix of paint that I used on my earlier IS-4 model. I'm afraid I don't remember what the exact mix was, but the green is probably a mixture of Tamiya Khaki and Yellow Green. 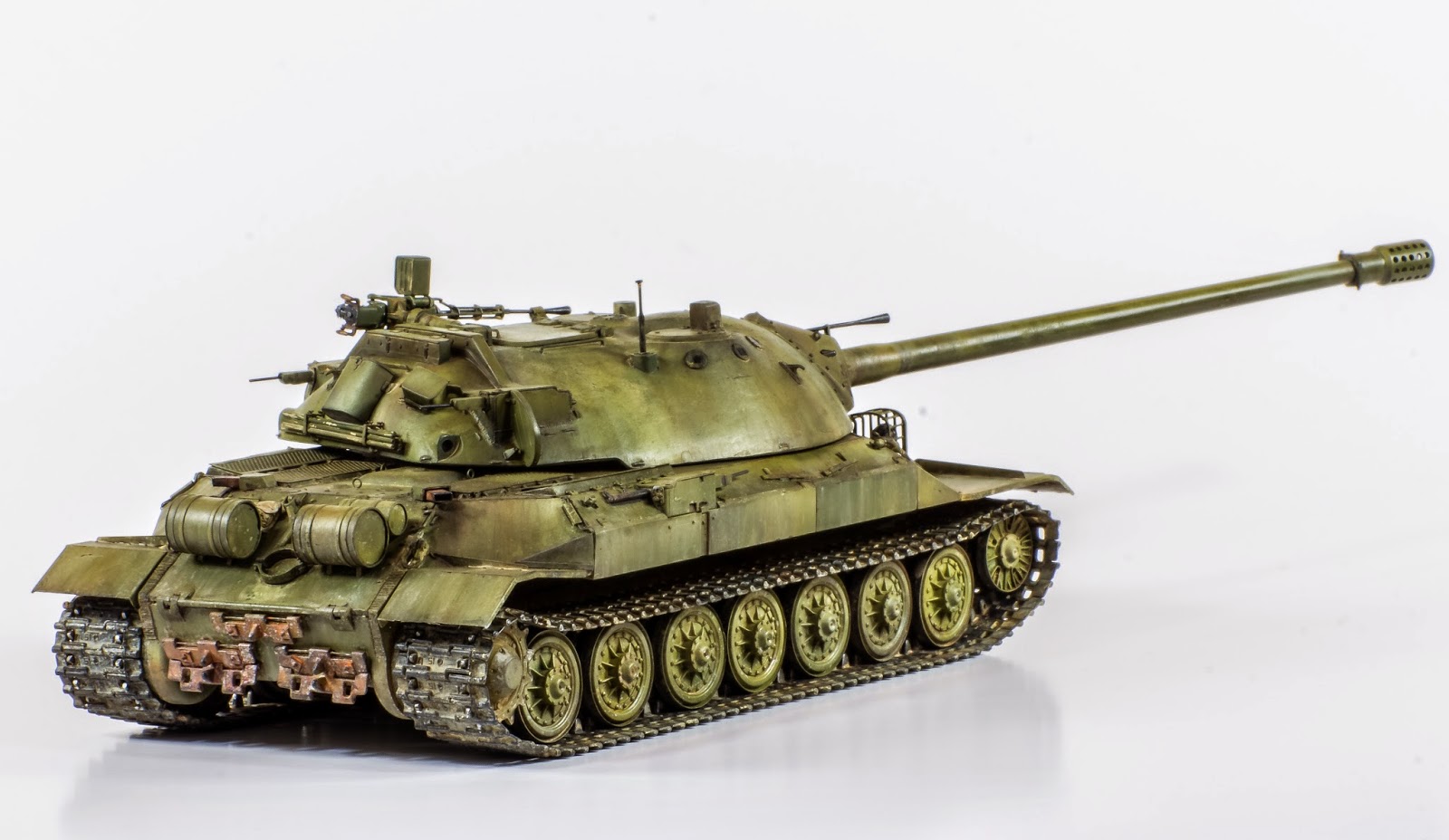 I'm really happy with some of the photos, but the touch-up process is still a challenge for me. Tell me what you like, and what you would change! 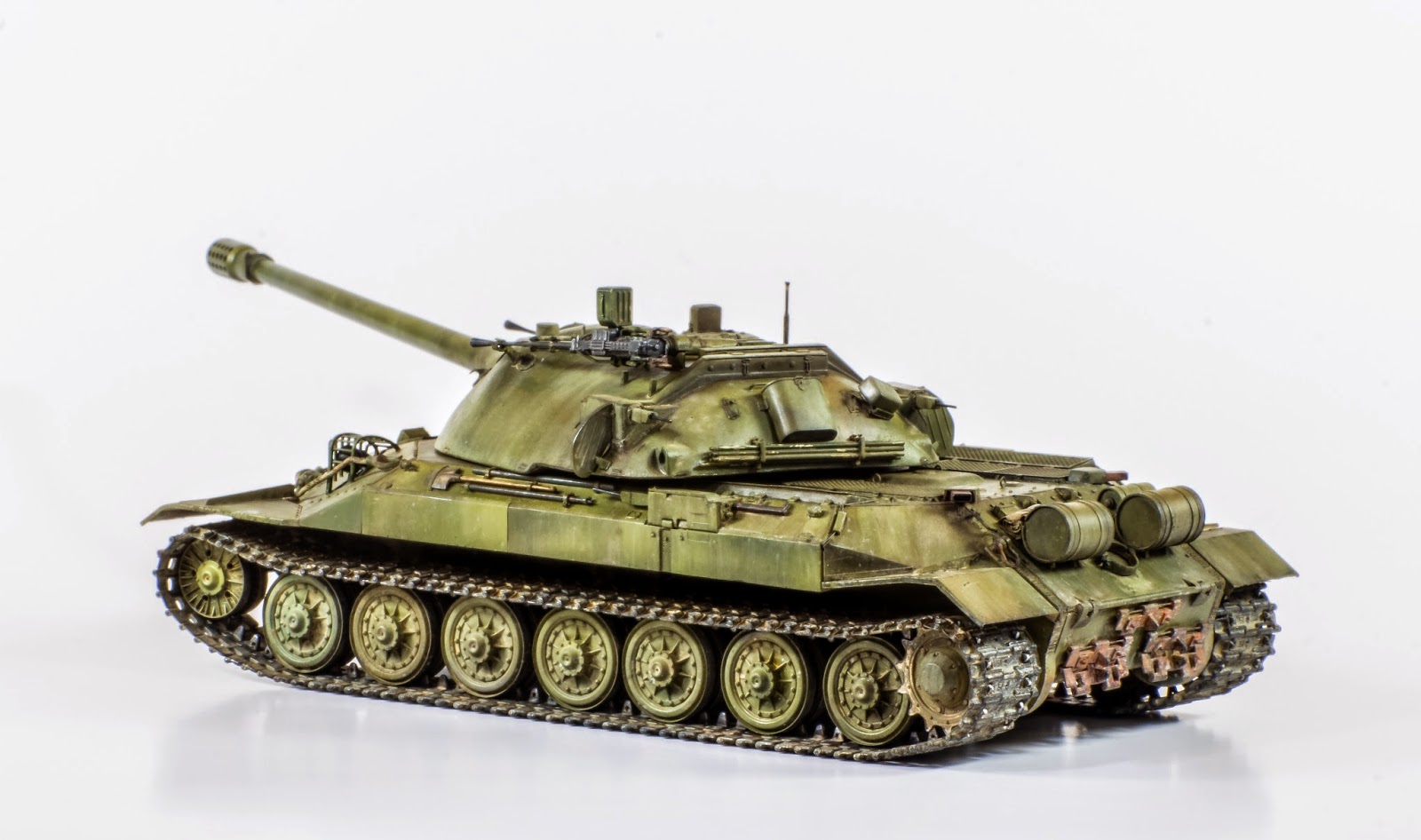 A big 'thank you' to my dad for giving me a couple of his extra track links to give me enough for the spare links. I would have had to cast an extra pair otherwise, and I wasn't looking forward to it. 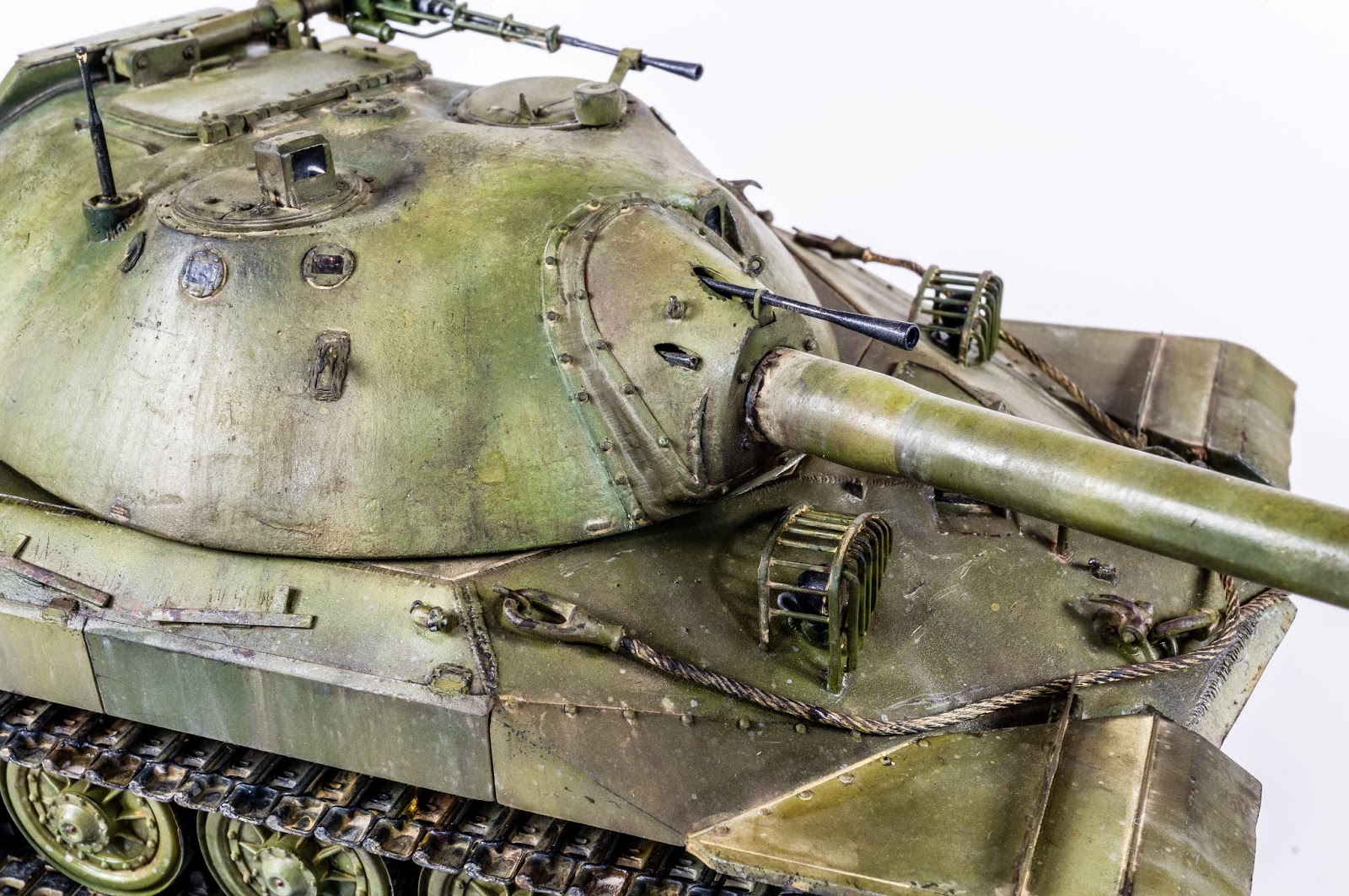 Probably the most prominent omission that I fixed on the kit is the pair of bolted mantlet cover rims. Any photos of the vehicle at Kubinka show this pretty prominently. I used thin strips of plastic for the rim itself, and the bolts are from Meng's hexagon bolt set. 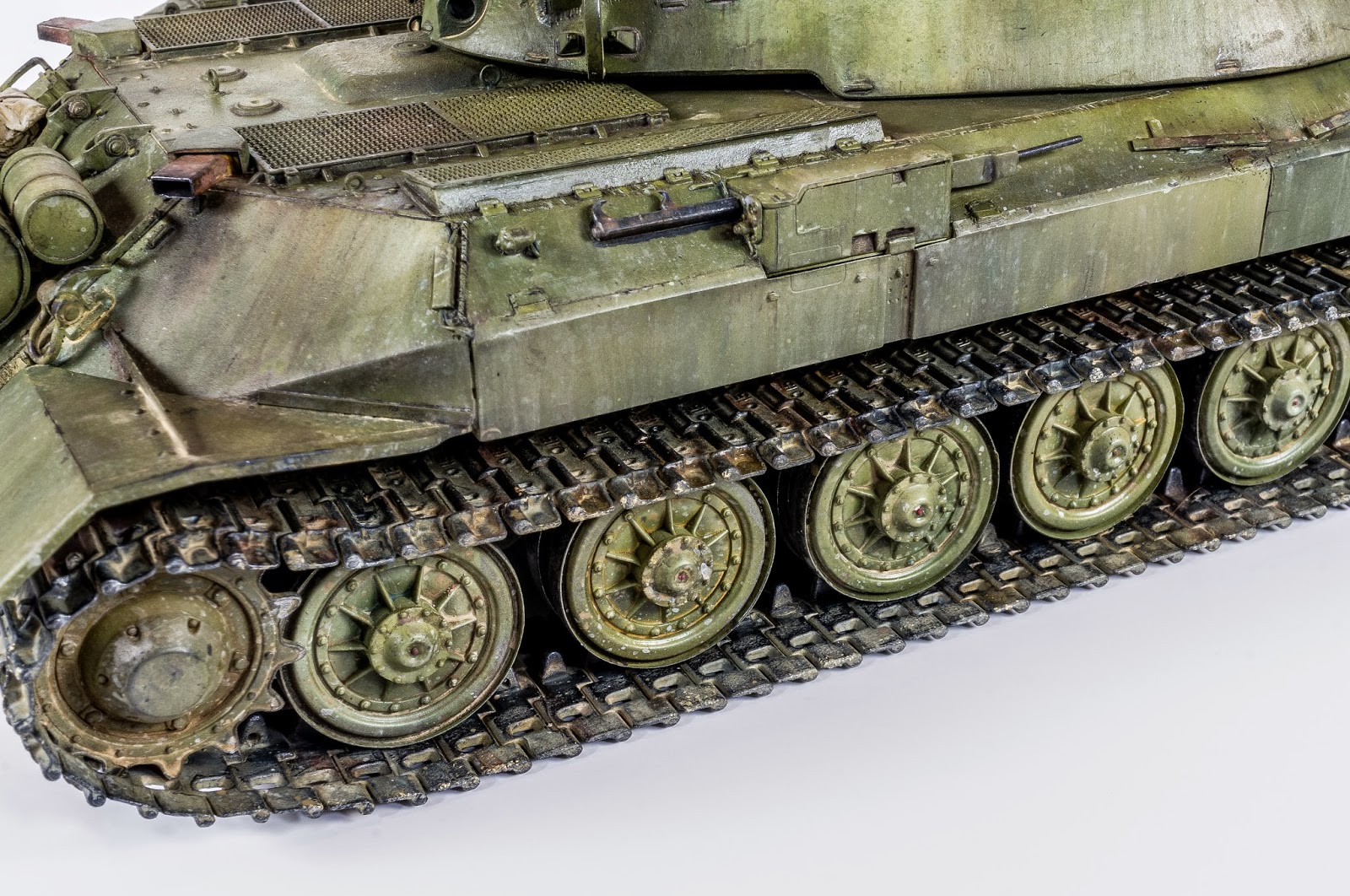 I didn't have any trouble with the kit's plastic link-and-length tracks, but I've heard that other people have had issues. I consider myself lucky. I did, however, have a difficult time trying to get the rear fenders to fit. 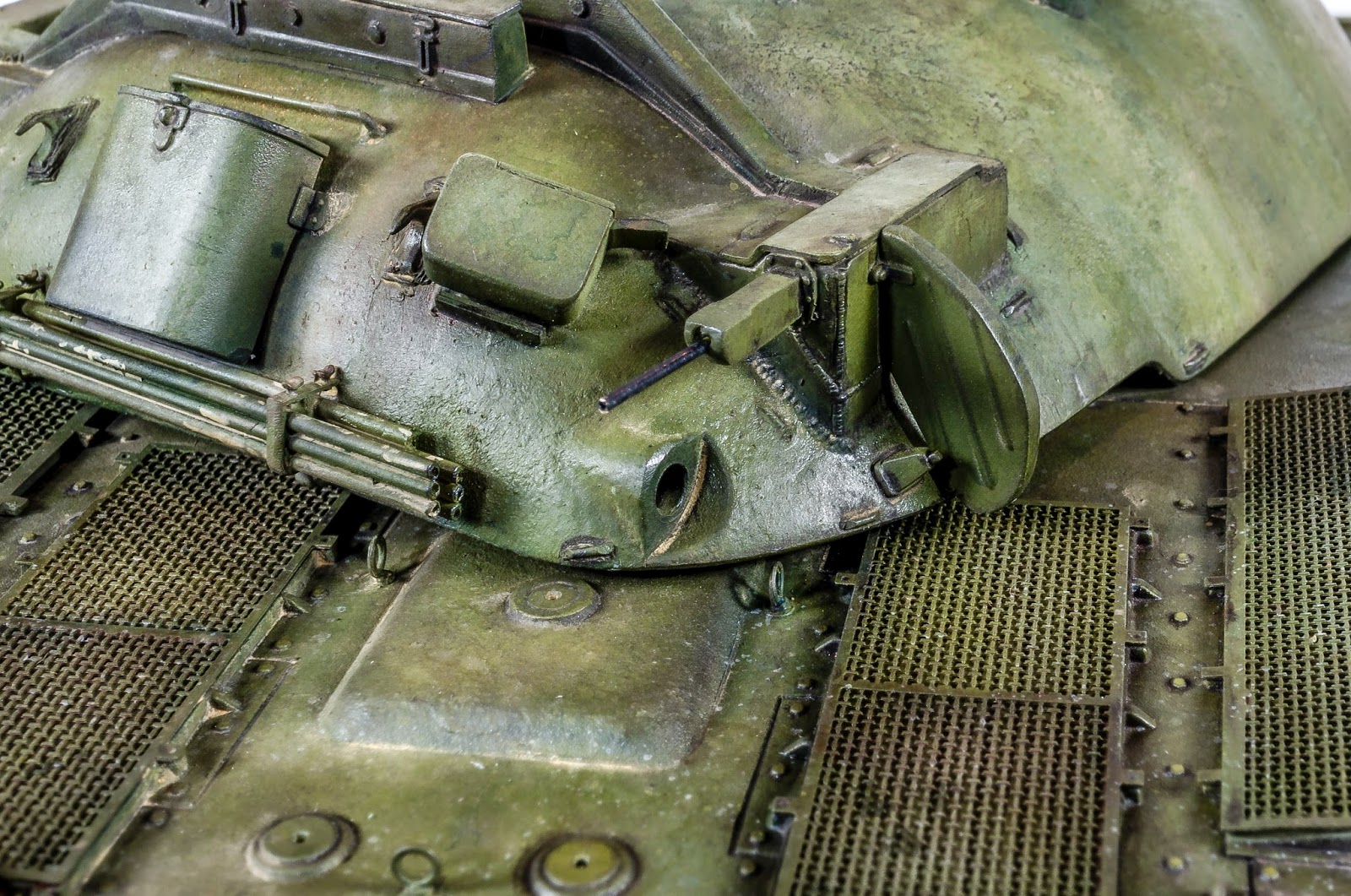 I added a bunch of weld beads to the turret's rear-facing machine guns. They're like a patchwork quilt! 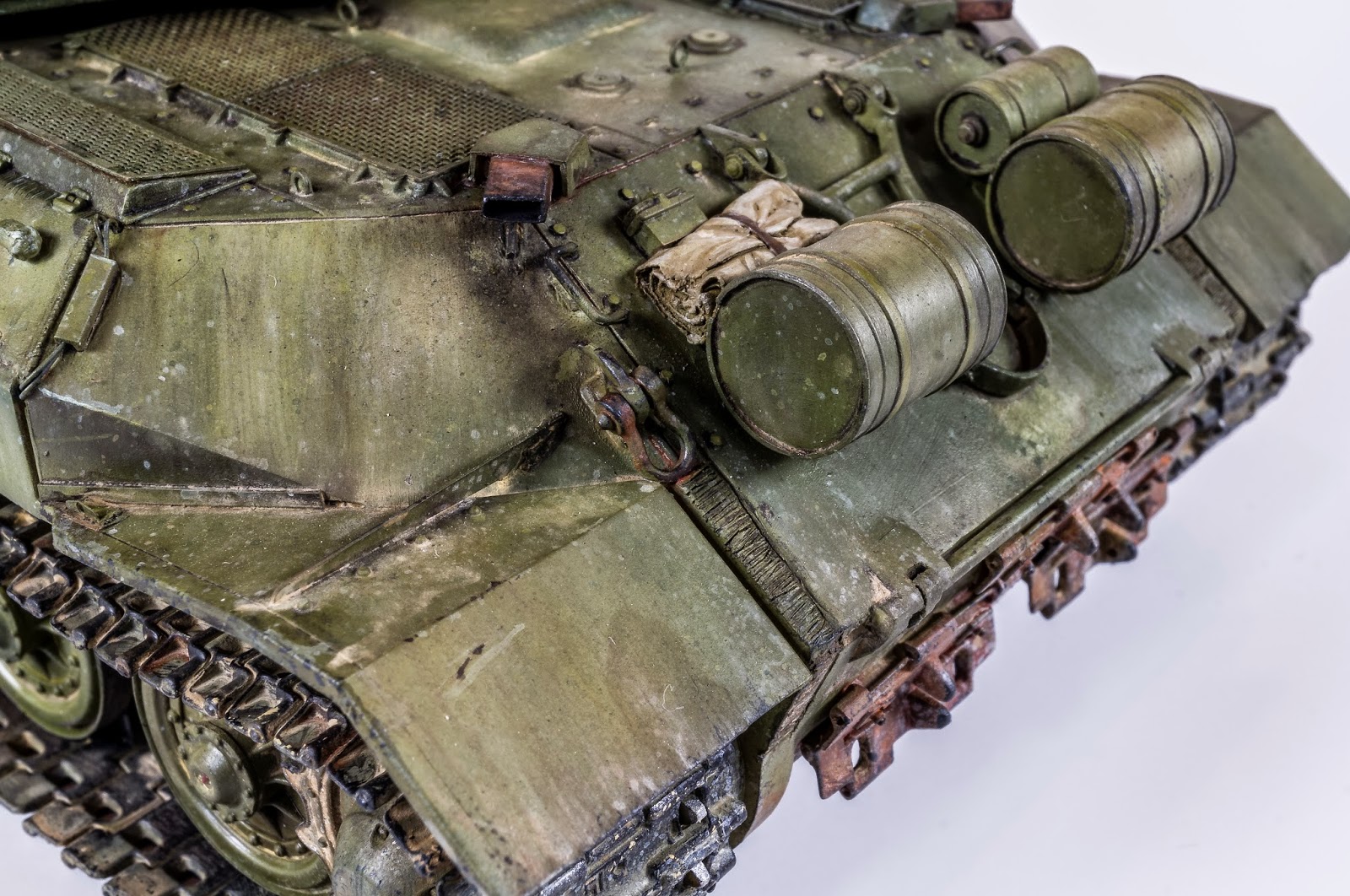 I will freely admit up-front that the rolled-up tarp behind the smoke canister in the above photo is covering up a mistake. I made it with Apoxie Sculpt. 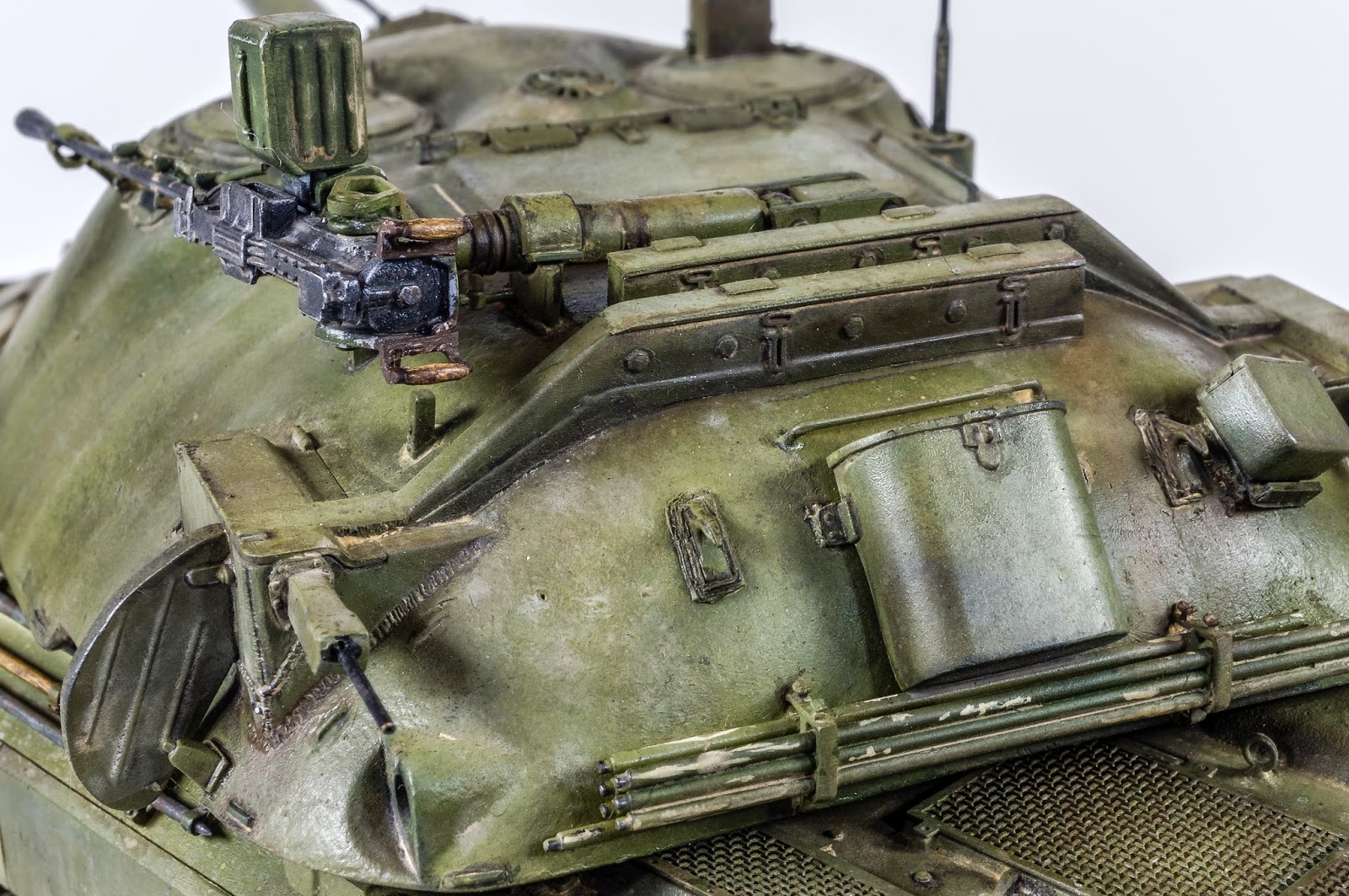 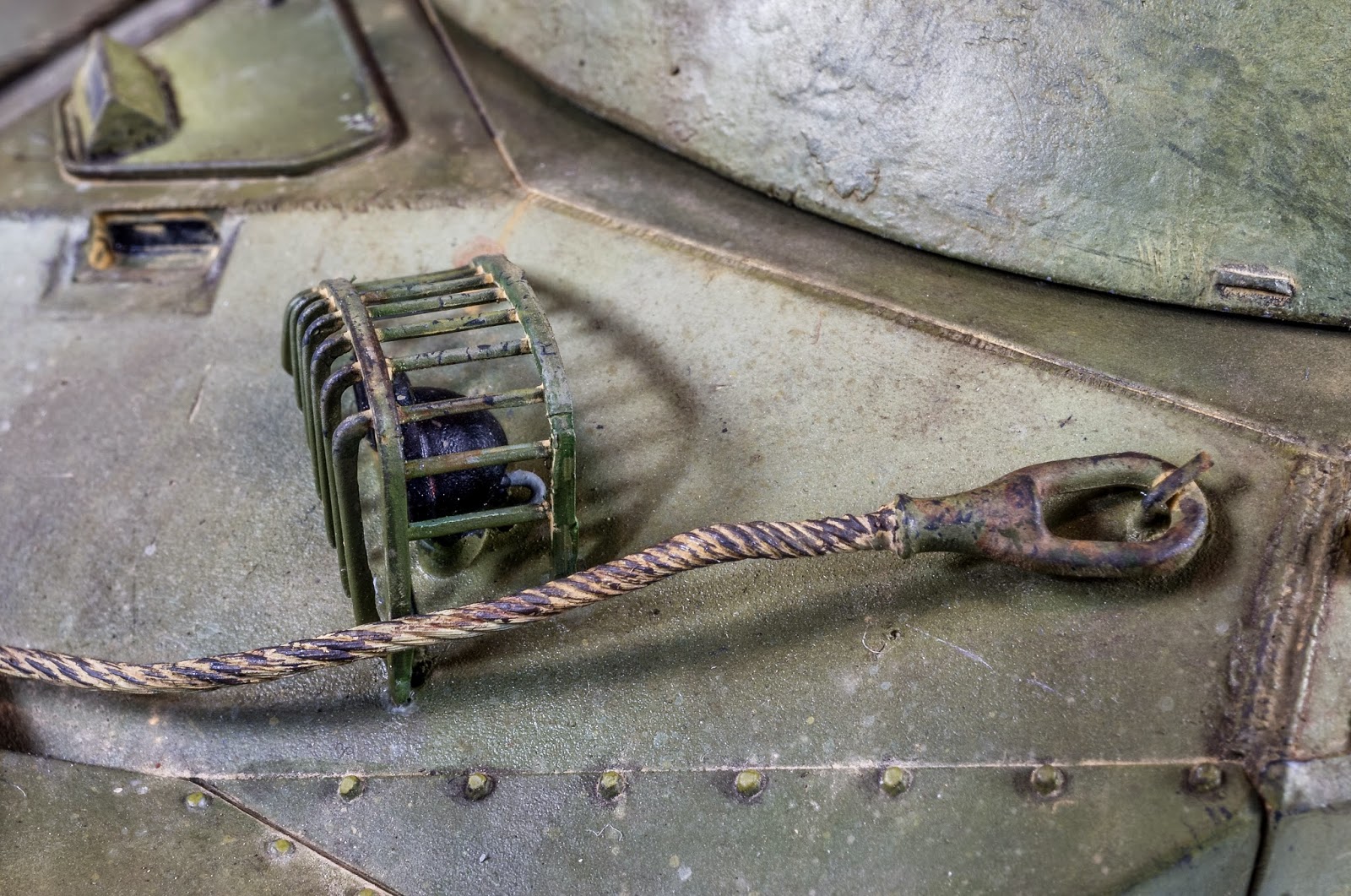 I have no idea how Trumpeter managed to mold these intricate headlight guards in one piece. They're fantastic! I painted them separate from the model in order to preserve access to the headlights. 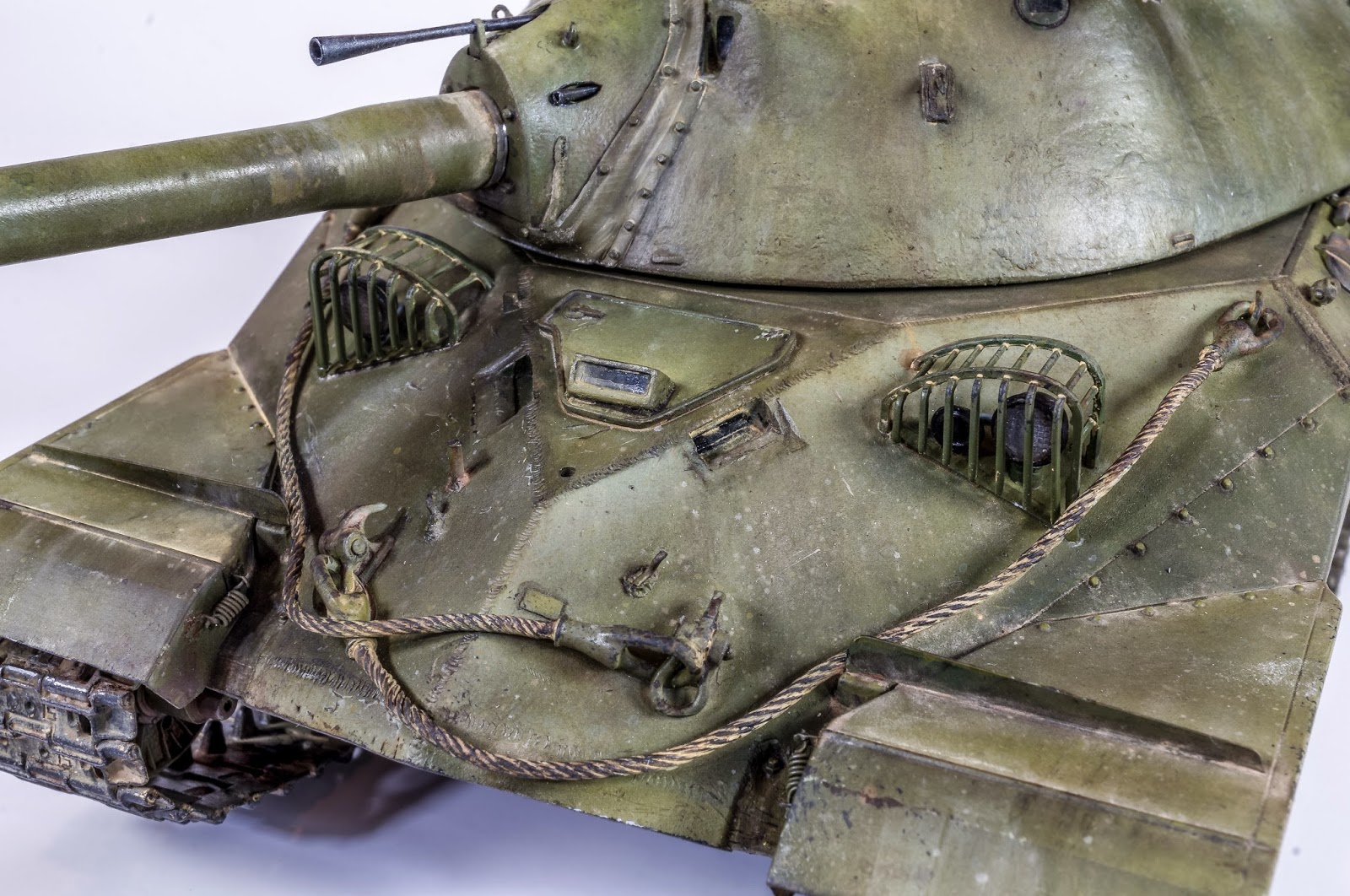 As you can see in the above photo, I went for a more heavy-handed "color modulation" effect on the 7's distinctive pike-nosed glacis. You can also (sorta) see a little bit of texturing that I painted onto the mantlet cover. This is the product of a lot of small lines painted with light tan Vallejo paint. For this, I used a fairly small but long brush to apply a lot of closely spaced parallel lines. I then repeated the process perpendicularly to the other lines for a cross-hatched look, which makes the smooth plastic surface look a little more like burlap or canvas. 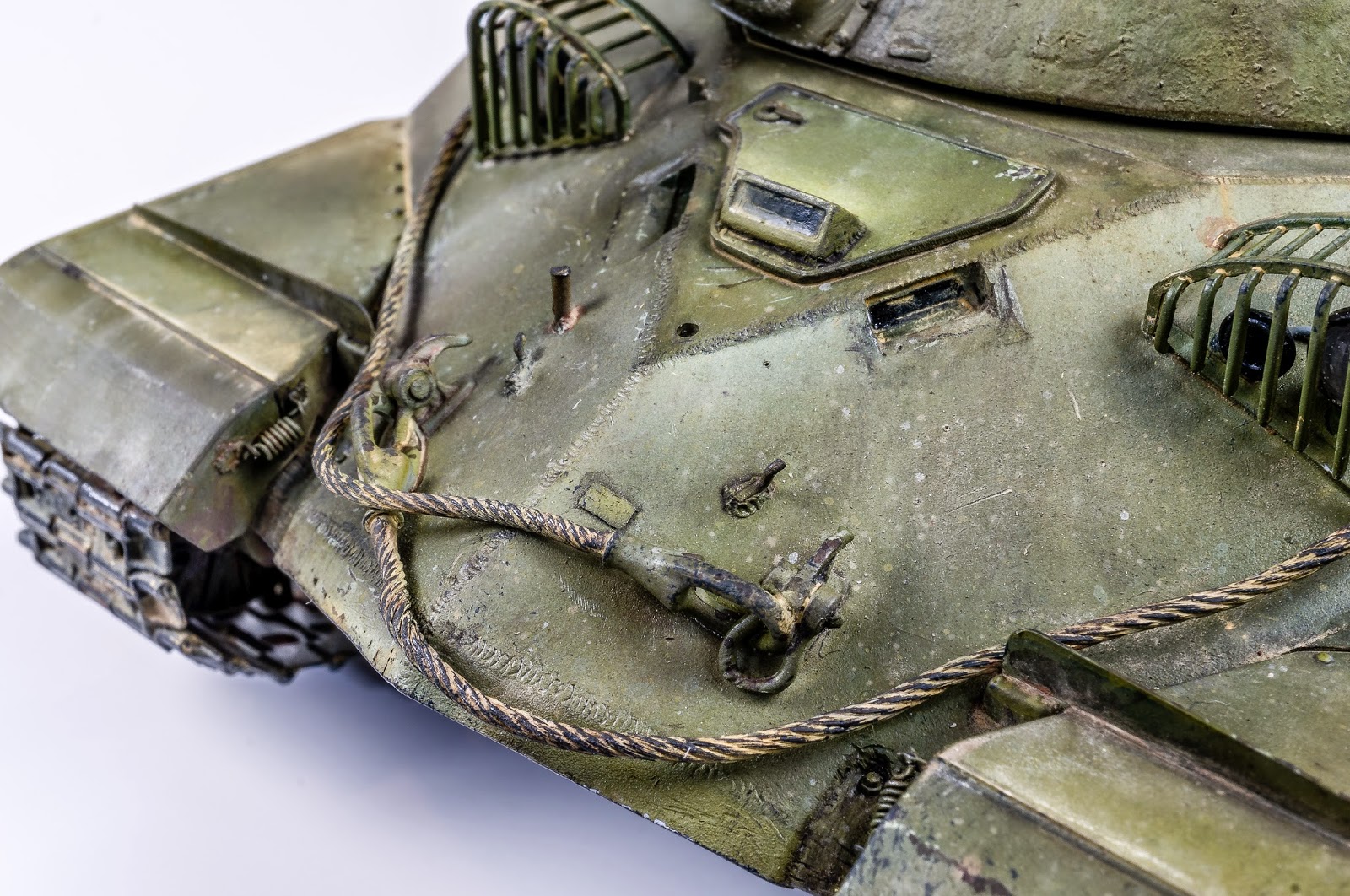 I have a lot of fun with tow cables. It's the one area where I can go completely overboard with chipping, rust, and dust effects and still stay within the realm of realism. 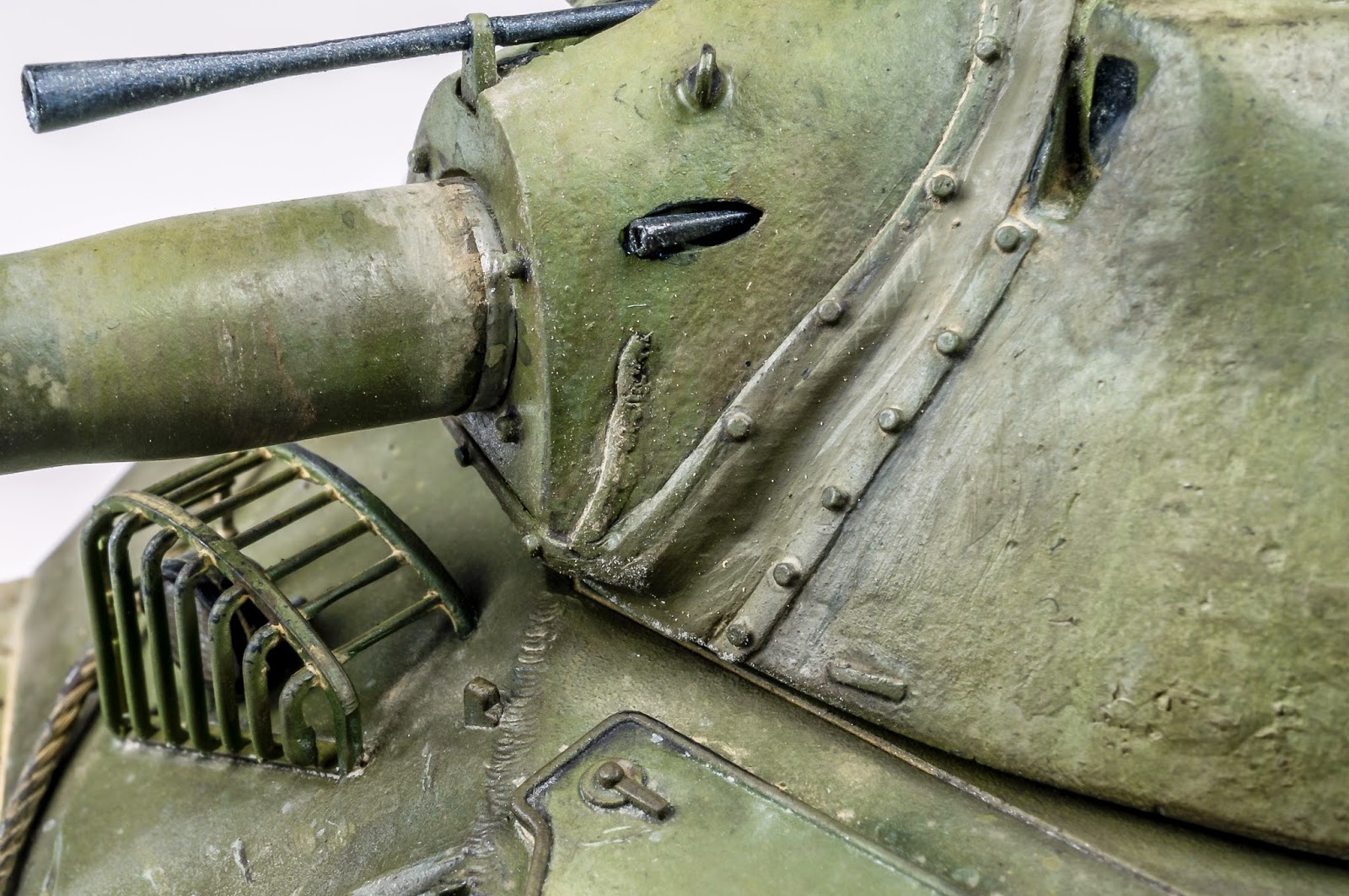 This close-up really shows one of my favorite self-made improvements on this model: the small ring of bare metal at the base of the gun barrel. I haven't seen this effect on many Soviet tanks, but I like how it looks on Shermans and the like. So naturally, when I saw it in a period photo of an IS-7, I knew I had to give it a shot. I used a sliver of Bare Metal Foil's Chrome for the metal effect, and made it stand out by building up layers of dust and grease at the border of the green paint and bare metal. If you're like me and build a lot of repetitively big green things, the little details like this really make things extra fun. 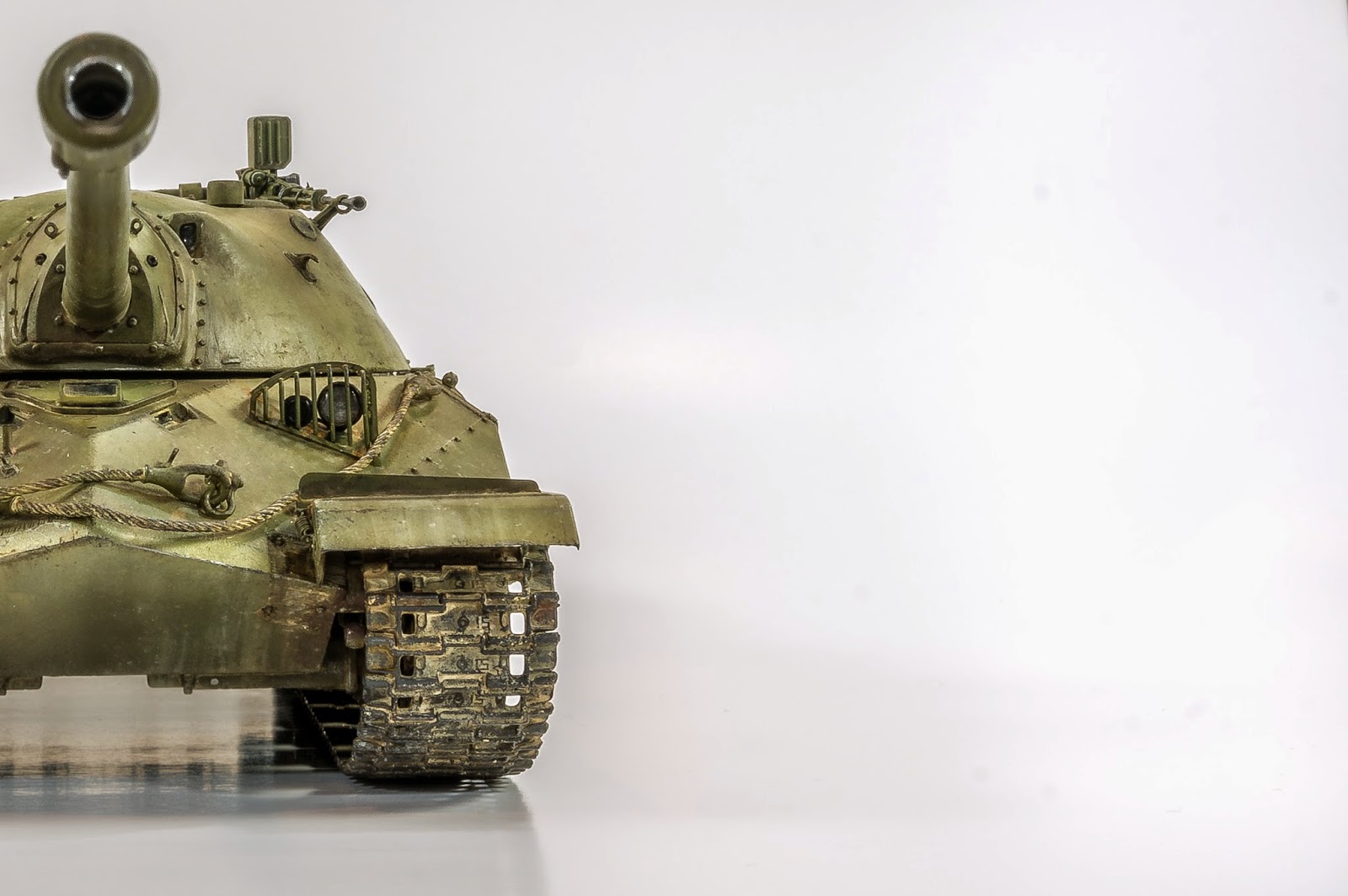 Thanks for looking, comrades! I greatly appreciate all comments and critiques.
Labels: 1/35, Armored Vehicles, Cold War