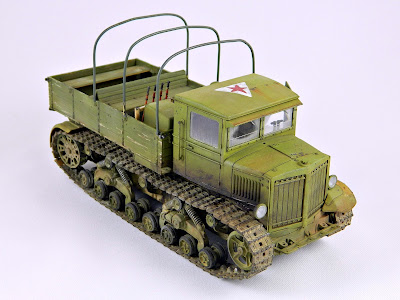 This is Trumpeter's 1/35 "Voroshilovets" heavy artillery tractor. The kit was built out-of-the-box, except for the a few trinkets and guns in the back, the new windows made of acetate film, and the brass poles used to support the canvas cover.  That's right, Voroshilovets. Say it five times fast, comrades! 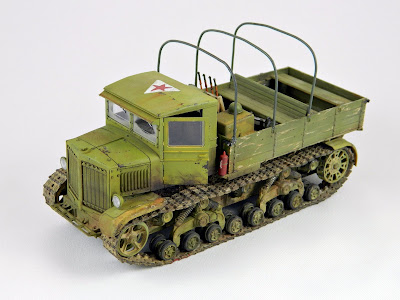 I used a 50/50 mix of Tamiya NATO Green and Yellow Green for the basecoat, followed by a series of oil washes. The mud was added prior to painting, and is made of Celluclay and dirt. I added PPsH-41 submachine guns and Mosin-Nagat rifles were placed on a scratchbuilt rifle rack, next to ammo boxes from Miniart. I added an extra ammo dolly from Trumpeter's B-4 howitzer to the bed to fill some of the dead space. Calibre 35 Soviet Boot footprint stamps were dipped in tan paint and stamped around the bed, but are almost invisible after the weathering. I used my new favorite "weapon"-- Vallejo paints-- to create paint chips on the wooden and metal surfaces. Dried seeds I found outside were scattered around to look like dead leaves, and Mig Pigments gave everything a dusty look. I printed off a small copy of a Pravda newspaper and glued it into the cab next to a cup o' joe. I used a couple of Archer's dry transfers for the instrument panel and Bose soundsystem inside the cab, but like the rest of the interior, they are almost impossible to see from the outside. (But I know they are there!) And don't forget, in Soviet Russia, car radio listens to you. 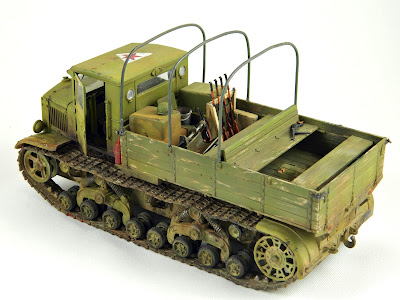 I used a compass to make custom windshield-wiper paint masks out of Tamiya masking tape. Unfortunately, I grossly misread my own handwriting and made them too large, so the wiper marks are much longer than the actual wipers. Hmmmph. 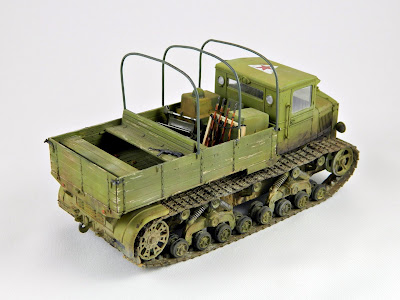 I had to take a break halfway through construction on this thing. There are way too many roadwheels on this abomination... 86 to be exact. Not too fun. 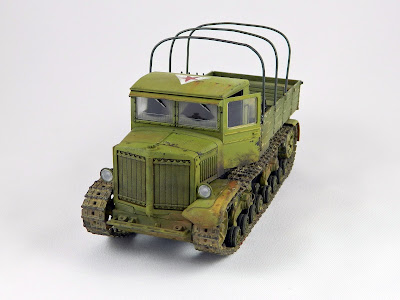 At some point, I would like to put this in a diorama; but I have yet to come up with any ideas worth pursuing. I'd also like to replace the tracks with the Fruilmodel metal ones, whenever I can get my grubby fingers on them. Of course, I appreciate all comments and suggestions!
Labels: 1/35, Artillery and SPG's, Great Patriotic War, Prime Movers, Soft-skinned Vehicles, Weathering