For better or worse, my addiction to all things "KV" has continued unhindered, resulting in yet another rendition of the RKKA heavy tank. My eighth build of a KV is, fittingly enough, the KV-8 flamethrower tank. It's the Trumpeter KV-8 kit with an alluminum barrel and radiator grilles from Aber, Fruilmodel tracks, and fenders from Voyager. I found the "recipe" on Niel Stokes' 4BOGreen website to be indispensible. 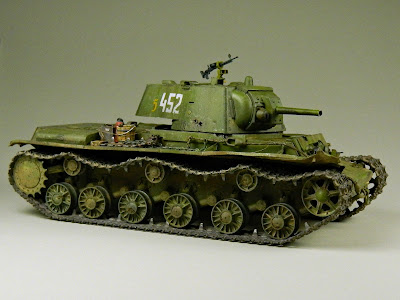 The KV-8 was a less than successful Red Army flamethrower concept that came about in 1942. Its main competiton in the RKKA was the OT-34, which was based on the more maneuverable and reliable T-34/76. The KV-8 had the advantage of being better protected, and of having the flame projector mounted in the turret, allowing for 360 degrees of crispiness. However, the flamethrower took up too much space in the turret and the normal 76.2mm cannon was swapped out for a much smaller 45mm cannon. A metal tube was placed around the smaller cannon to make it look like a normal KV, or perhaps to keep the crew from feeling "inadequate."  The OT-34's flame projector replaced the radio operator's hull DT machinegun, which limited the flamethrower's arc of fire but allowed the turret to retain its standard F-34 76.2mm gun. The KV-8 wasn't the most successful of vehicles, but regardless a few hundred were made, most seeing action in the North around Leningrad and the Baltic States. 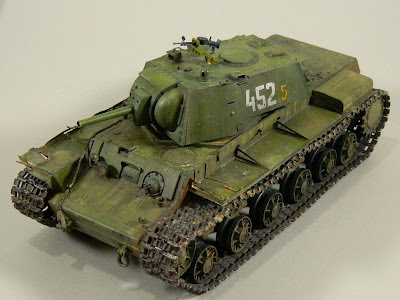 The Trumpeter KV kits are great... maybe that's why I can't stop building them. Aside from the aftermarket items, I added some torch-cutting marks along the sides of armor plates in addition to a bit of texturing using a dremel tool and a coarse steel rasp. I added a few weld beads where they were missing or understated, and removed the "flange" from the periscope covers and ventilator on the turret roof. Here you can see the small barrel of the 45mm cannon hidden inside the faux 76mm barrel. I also added the small lip that extends over the driver's vision port using the side of a photoetch fret. I made mine a little too short, as it should extend down the sides a little further. This lip acted as an umbrella to prevent any of the flame projector's flammable goop from seeping into the driver's lap through the vision port. 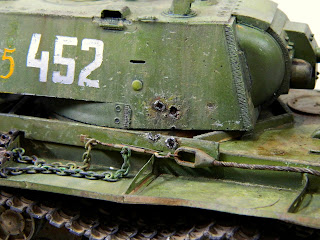 Something I've always forgotten about but wanted to replicate is a shell impact. A nail heated over a candle was pressed into the plastic to create that nice cratered effect. The KV was extremely well protected even by late-war standards, and these impacts only scratched the paint a little. 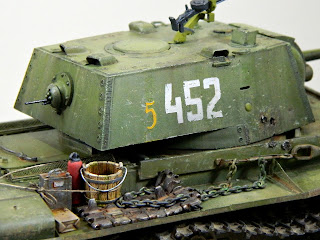 The fuel tanks for the flamethrower took up a lot of space inside the tank, so more of the crew's equipment would have to be stored in the fender toolboxes or outside. The fire extinguisher and oil can are old Verlinden items, the bucket is from Boyardi, and the package is from my parts box. If you look carefully, you can see that I cut the split links in half at the end of the spare track segment. It's one of those stupid details I really get a kick out of. 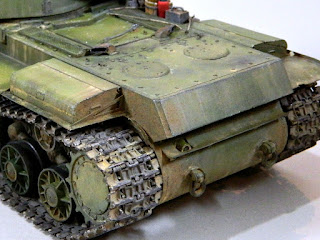 I used Blacken-It on the Fruil tracks, and AK Interactive "Kursk Earth" enamel paint for the majority of the dirt effects. 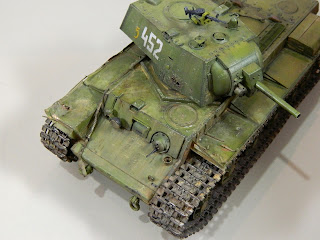 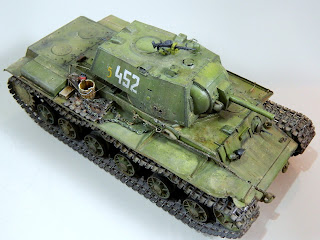 That's enough blabbering for now. I have more modeling to do! All feedback is appreciated, and thanks for looking! 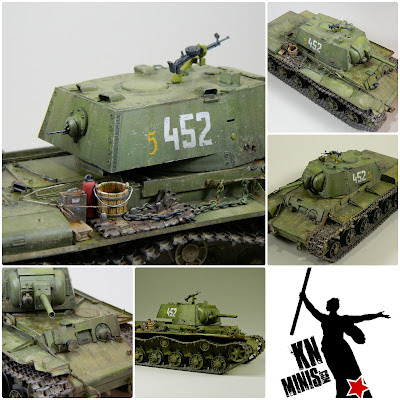