This kit shows what Trumpeter is capable of when they put their "A Team" on a project. This is by far the best-detailed model I have ever built by this manufacturer and I am thoroughly impressed! 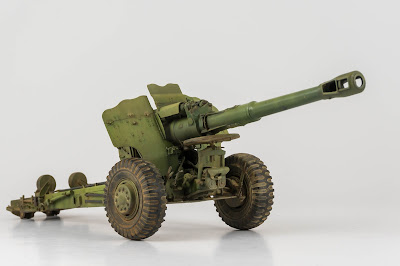 The D-20 was designed by the Petrov Design Bureau at the end of the 1940s and has remained in service in armies around the world. It has been copied and modified to a variety of different calibers and purposes over the years, most notably as the Type 66 (People's Republic of China). 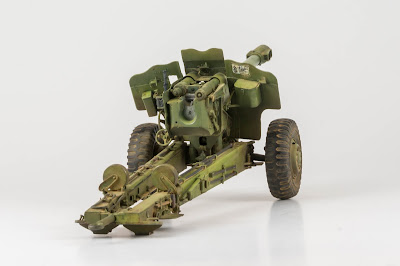 I used a mixture of Tamiya paints for the overall green finish. It's hard for me to remember what exactly I used, but I know I used lots of Nato Green and both Flat Yellow/Flat White and IJA Green to lighten and darken the base color respectively. 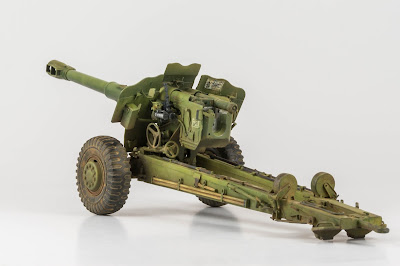 I opted to limit the wear and tear, because I want to keep my options open in case I decide to place the model behind a prime mover at some point. It's tricky trying to match shades of dust between two models: this way, I can always come back and add weathering to it later to match whatever is towing it. 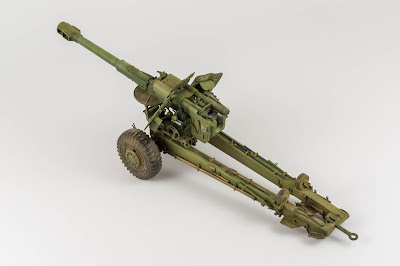 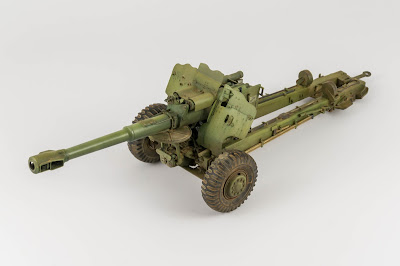 I used the kit tires, which are the black vinyl-rubber material many armor modelers seem to revile so passionately. They worked fine for me! 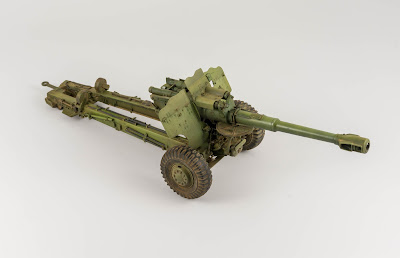 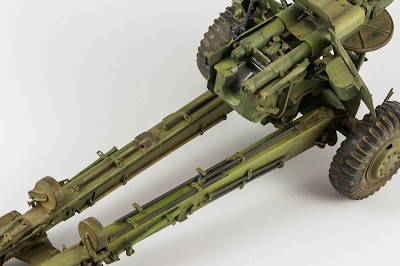 The large rotating stability plate is stowed with the bottom facing upwards underneath the barrel and received the most attention as far as weathering is concerned: A few dabs of dark brown and gray from a sponge helped create a mottled, worn appearance. Graphite from a pencil was rubbed sparingly onto the highest corners and edges to mimic exposed metal. 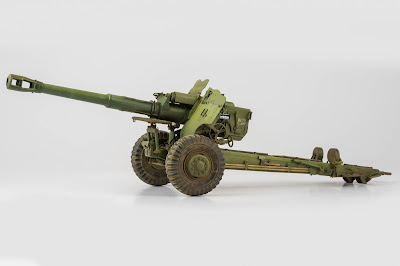 I managed to leave a pretty nasty seam running down the side of the barrel, and it's painfully evident in some of the last shots. I'd rather move on to the next model than lose sleep over yesterday's model, and besides, once it's on the shelf, it gets lost in the sea of green anyways! 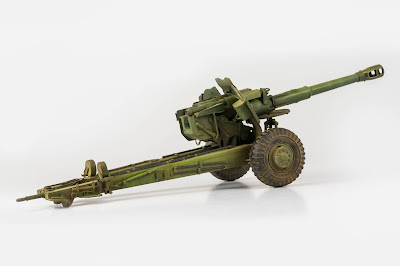 I love the squat, stubby appearance and proportions of this gun. It looks like a bulldog, in some stretch of the imagination. Maybe it's just me. (Definitely just me.) 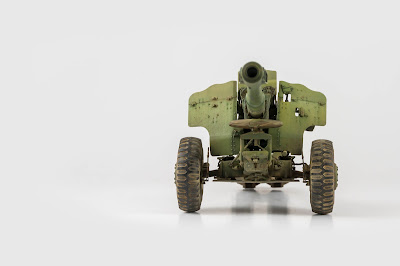 I can't wait to see how this thing looks behind a URAL-375D! Luckily, Trumpeter has already announced that kit as well.

Thanks for looking! All feedback is greatly appreciated!
Labels: 1/35, Artillery and SPG's, Cold War