This is the Hobby Boss 1/72 Mi-24D Hind E, built right out of the box. The kit is essentially a down-scaled version of Trumpeter's mighty 1/35 model, minus the engines. I used this little Hind model as a test-run for the larger Trumpeter version that I'm currently working on. 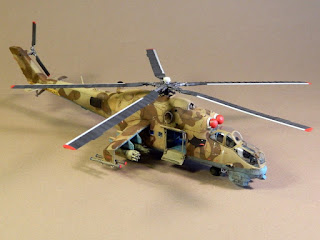 Assembly was a breeze, excluding the nasty seam that runs down the length of the fuselage. There was also a seam right across the middle of the canopy, which I lightly sanded and polished out. I spent most of my time painting the gadgets inside the cockpit, which are now all but invisible behind the thick canopy. I left all the wheels, landing gear, rotors, and landing gear doors separate from the fuselage for painting. 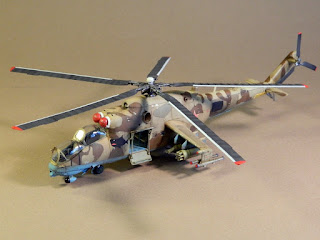 I used the kit's supplied markings, which depict a Russian Hind in Kalinovskiya during the second Chechen conflict in 2000. Interestingly, the vehicle numbers were painted over in black, to prevent any insurgents from targeting the unit's hometown with terrorist attacks. After masking the canopy with Tamiya masking tape, I painted the dark brown color using a now forgotten mixture of Tamiya paints. I then masked the chosen areas using Silly Putty, sprayed the tan color, and removed the putty after a few minutes. I'm pretty happy with the results. The decals went on flawlessly, and after a few light washes and a bit of paint chipping, the bird was finally finished. Since its completion, the gun on the nose was broken off and is MIA. I don't really feel like scratchbuilding it.