Ahmad Shah Massoud, also known as the "Lion of the Panjshir," is Afghanistan's official national hero. During the Soviet invasion of Afghanistan in 1980, Massoud became a resistance leader in the Mujahideen. He defeated Soviet forces in the Panjshir valley on nine separate occasions. (!) When the Soviets pulled out of Afghanistan, Massoud became the leader of the Northern Alliance, which resisted the rule of the Taliban and other extremists. Massoud was assasinated by Al Qaida suicide bombers two days before the September 11th terrorist attacks in 2001. 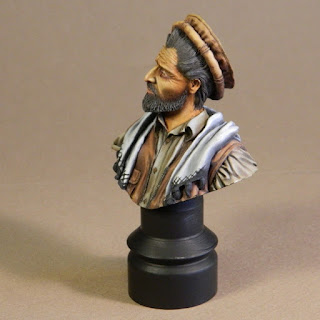 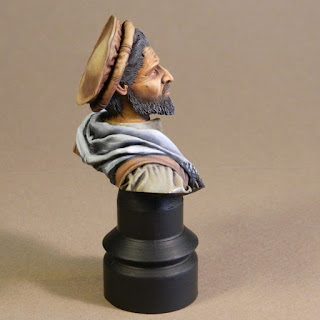 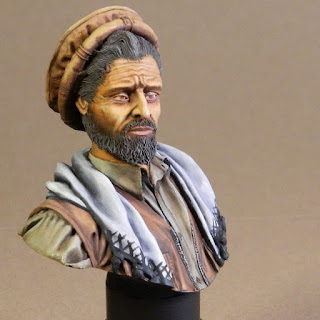 This bust is from New World Miniatures, and I am unsure of the exact scale... I'm guessing he's about 1/12th. I started with Vallejo acrylic paints as base colors, which were applied over a black spray primer. I used Winsor-Newton oil paints for highlighting and shadowing the entire figure. I really struggled with finding a skintone that looked more arabic than caucasian. After much tinkering, I found that several thin glazes of olive and burnt sienna changed the skin's color to the shade I was looking for.
Labels: Busts, Figures, Soviet-Afghan War