I've made some progress in the way of flesh lately. I experimented with using a few subtle (almost invisible!) glazes of Winsor-Newton Sap Green oils around the chin, under the nose, and around the hairline. It helped make the skin look less rosey and pink. I still need to tidy up the shadows, eyelids, and lips, and the eyebrows need painting too. 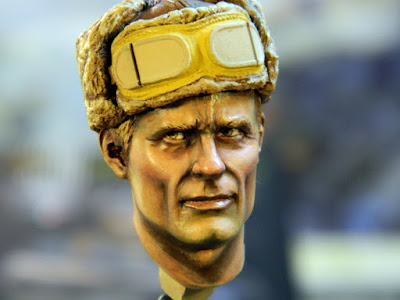 I also did a bit of work on the fur hat, but more on that later. I'm still contemplating whether or not I want to cover his face in dirt or not. We'll find out, I guess.
Labels: Busts, Figures, Great Patriotic War, Soviet Mountaineer