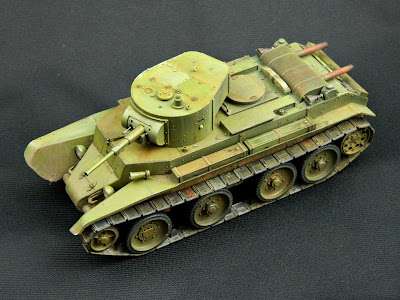 This is the Tamiya BT-7 that I started in early 2011, but never really got around to until recently. I was about to basecoat it when Young Miniatures released their bust of the Soviet Mountaineer, which promptly took over as the top priority on my workbench. After looking at the fantastic model by Mig Jimenez, I was quickly drawn back to this little dragster with tracks. 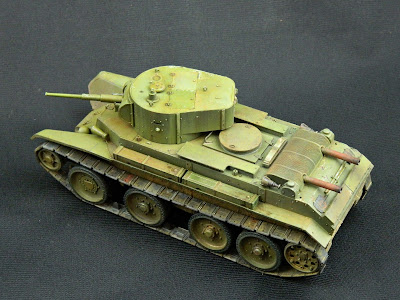 I took a little bit of a breather for this tank. The only changes I made were the addition of a wire that runs from the hull to the horn on the fender. Everything else; tracks, barrel, and all; came right out of the box. 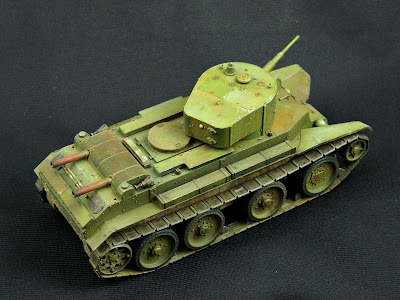 I don't remember the exact colors I used for the greens, but I know that I used quite a variety of tones. Almost every panel, toolbox, wheel, fuel can and major surface was treated to a different shade of green, which helps break up that otherwise boring monotoned finish. A half dozen or so Vallejo greens were always open on my workbench, ready to be used. I applied each thin layer of color with a large brush. A few filters helped tie everything together when I was ready to move on. 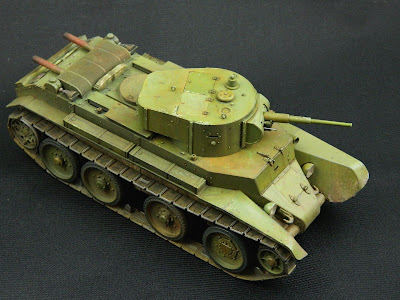 I made a concious effort to step away from relying on paint chipping to make surfaces look interesting. I think it's a step in the right direction. 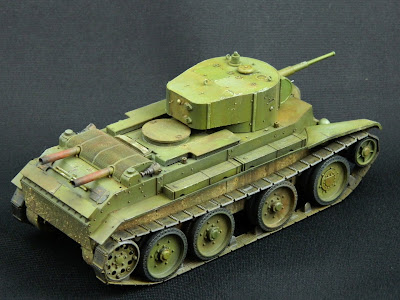 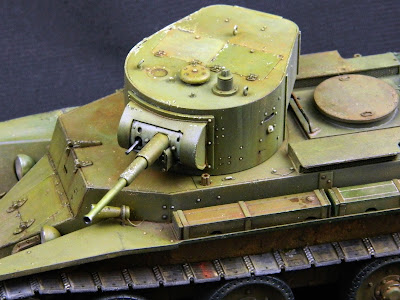 I really like this picture... I think it makes the model look better than it really is. 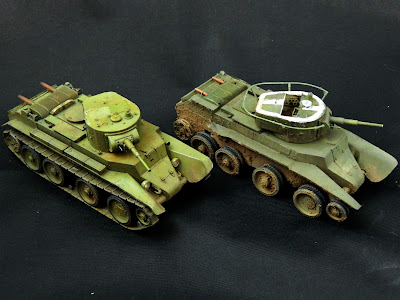 This is a side-by-side with my older BT-7 from Eastern Express. This hunk-of-junk from my finished model box of shame (right) is a model I am very unhappy with, so I don't really feel like taking many pictures of it. There is no comparison between the quality of the two kits. I spent over 100 hours building the Eastern Express kit, and the end result is still less accurate, less detailed, and resulted in less fun. While it does have a simple interior, but it is included in the Eduard photoetch set for the Tamiya kit anyways. Conversely, Tamiya's kit took less than seven hours to build, (!) and I got to spend more time doing the fun part-- painting.
Thanks for looking!﻿
Labels: 1/35, Armored Vehicles, Great Patriotic War