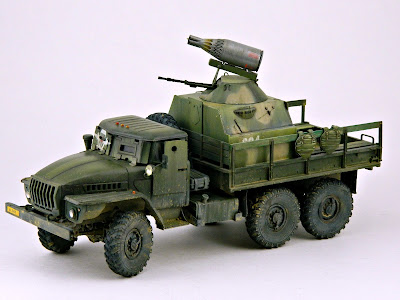 After a long period of getting nothing done, I have completed a model! This is the Ural 4320 Метла, or "Broom," which is a field modification made by Александр Метла (Alexander Metla, which means broom in Russian) for the VDV airborne forces during the Soviet war in Afghanistan. The modification placed a section of a BRDM-2 armored car in the bed of an up-armored URAL-4320 6x6 truck. The 14.5mm gun in the BRDM turret was supplemented by an externally mounted UB-32-57 rocket pod from an aircraft hardpoint. I used the ICM URAL 4320 kit, along with resin wheels from Miniarm and the conversion from KFS miniatures. The KFS conversion is fantastic: I spent less than ten minutes cleaning up the parts before assembly. I wish I could say the same for the resin wheels, which were slightly warped and required a lot of tedious clean-up. 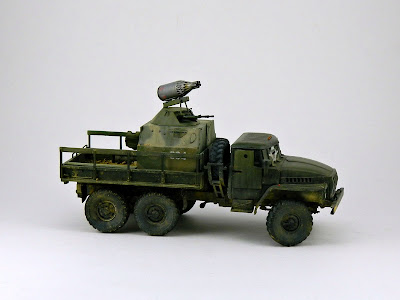 About a week after purchasing the ICM URAL-4320 kit, Trumpeter announced a version of the same vehicle. I knew that if the Trumpeter kit was released before I built the ICM version, the ICM kit would sit on my shelf untouched, forever. So, I started building the truck out of guilt, but I soon came to love the looks of it. 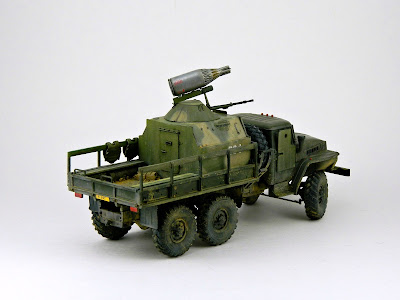 I used Tamiya Olive Green for the truck, and a leftover amount of paint from my T-90A was used for the BRDM-2 hull green. I brush-painted the tan color in thin layers using Vallejo German Beige paint, and applied decals from Trumpeter's BRDM-2 (early) kit. The rocket pod was painted with Alclad II Aircraft Aluminum. 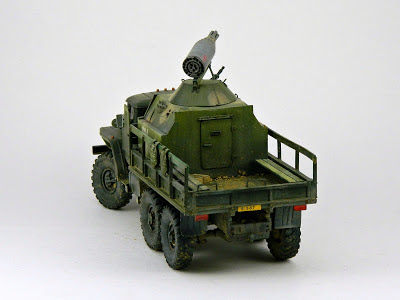 I secured the debris in the bed with AK Interactive Sand and Gravel fixer. This stuff is awesome, because it doesn't change any colors but it still fixes sediment to a surface with relative strength. 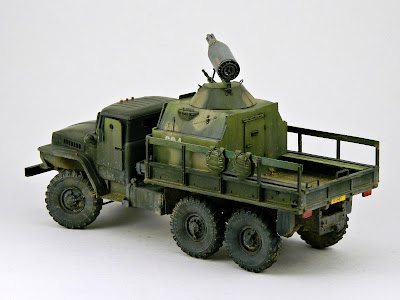 I also replaced the mudflaps with embossed foil that I cut to shape with scissors. They have small bends in them like real mudflaps, but they don't have the nasty ejector-pin marks that came with the plastic ones! 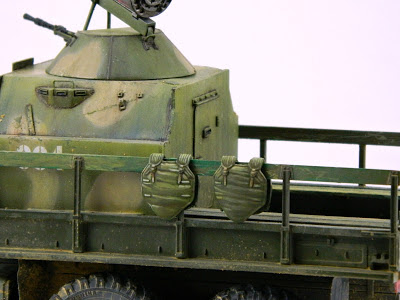 I draped some 6b2 ballistic vests over the side rails, using the 'flat' ones in an ICM figure set. I saw some pictures of trucks in Soviet service with these vests draped over the doors for added protection, so I decided to place them on my model. 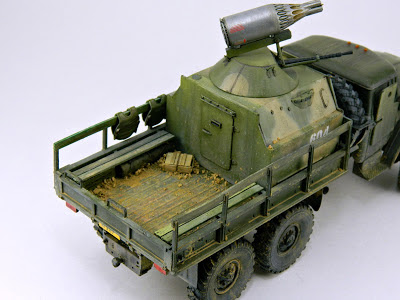 Along with the vests, I also added some ammo boxes and a rolled-up tarp. I painted these items separately from the model and added them during the weathering. 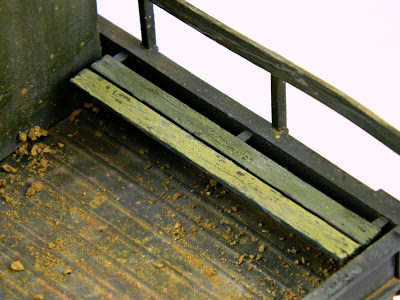 I tried using some crackle paint for the wood, and I like the results! I found a great suggestion on Alex Benvenuti's blog, in this post. Thanks for the tip, Alex! 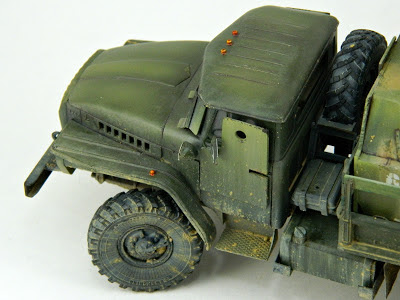 A fellow modeler pointed out that I am missing a fuel cap on the small gas tank. I'll get around to it, eventually. 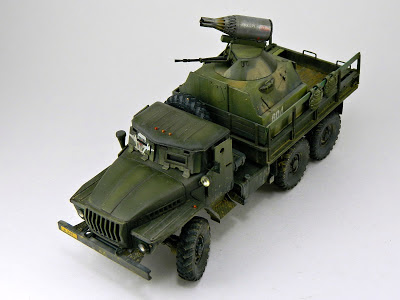 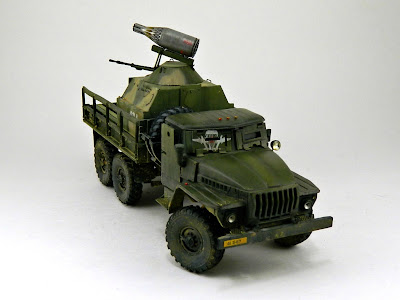