Just in time for winter, I've completed another model; here is my IS-4, finally finished. It's another one of my favorite vehicles, and like the Object 279 it came from the drawing board of Lev Troyanov of the Kotin design bureau. My model is the Trumpeter 1/35th scale kit with a metal barrel from Aber, tons of Meng's new plastic bolts/fasteners, a lot of little modifications looted from my spare parts box and an Eduard JS-3 photo-etch set. It took about 3 1/2 months to finish this project from start to finish. 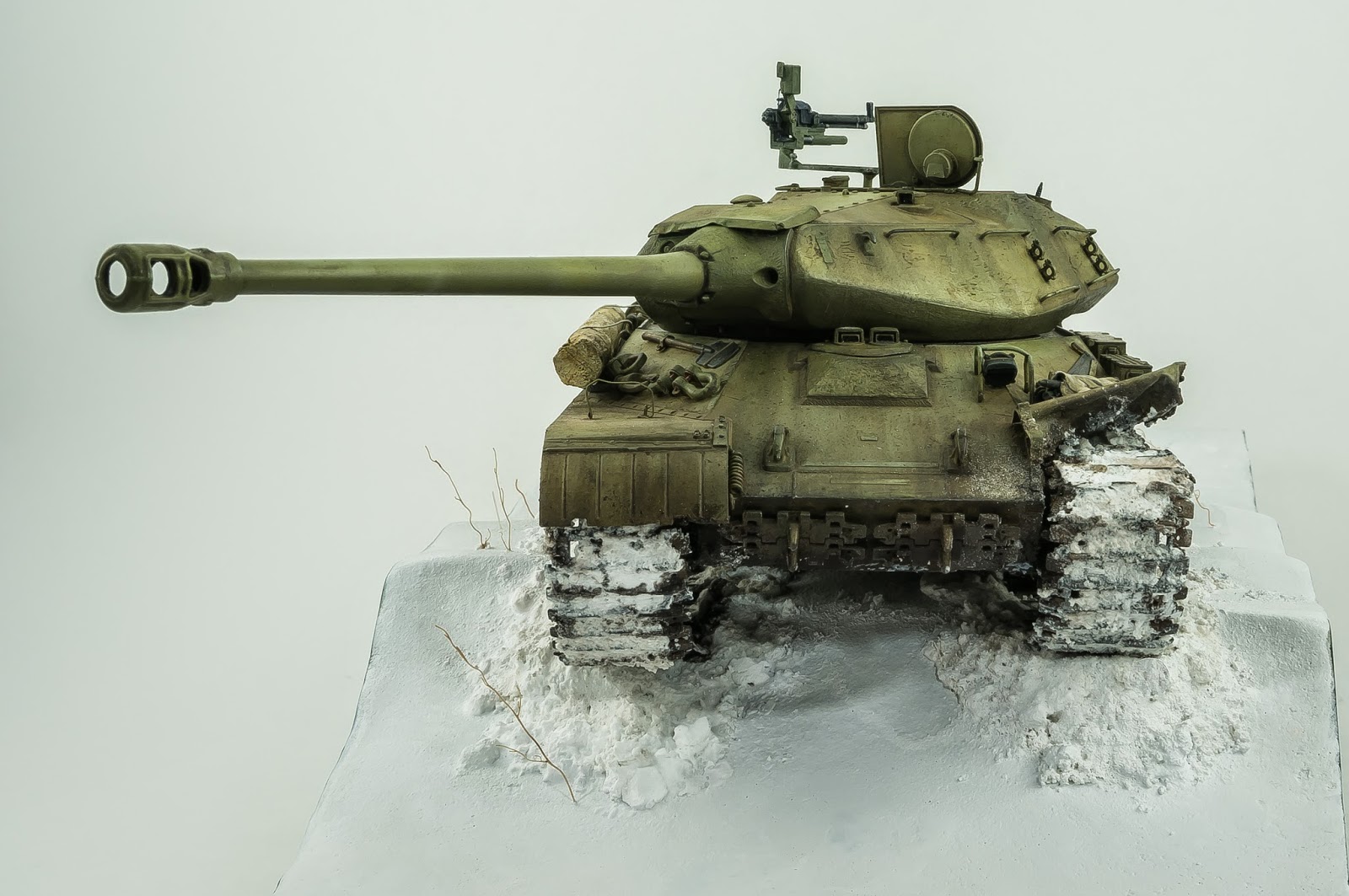 I have always really wanted to replicate an articulated suspension on a tank, and the IS-4 (or JS-4 if you prefer) has always been one of my all-time favorite tanks, so I decided to tackle both at once. 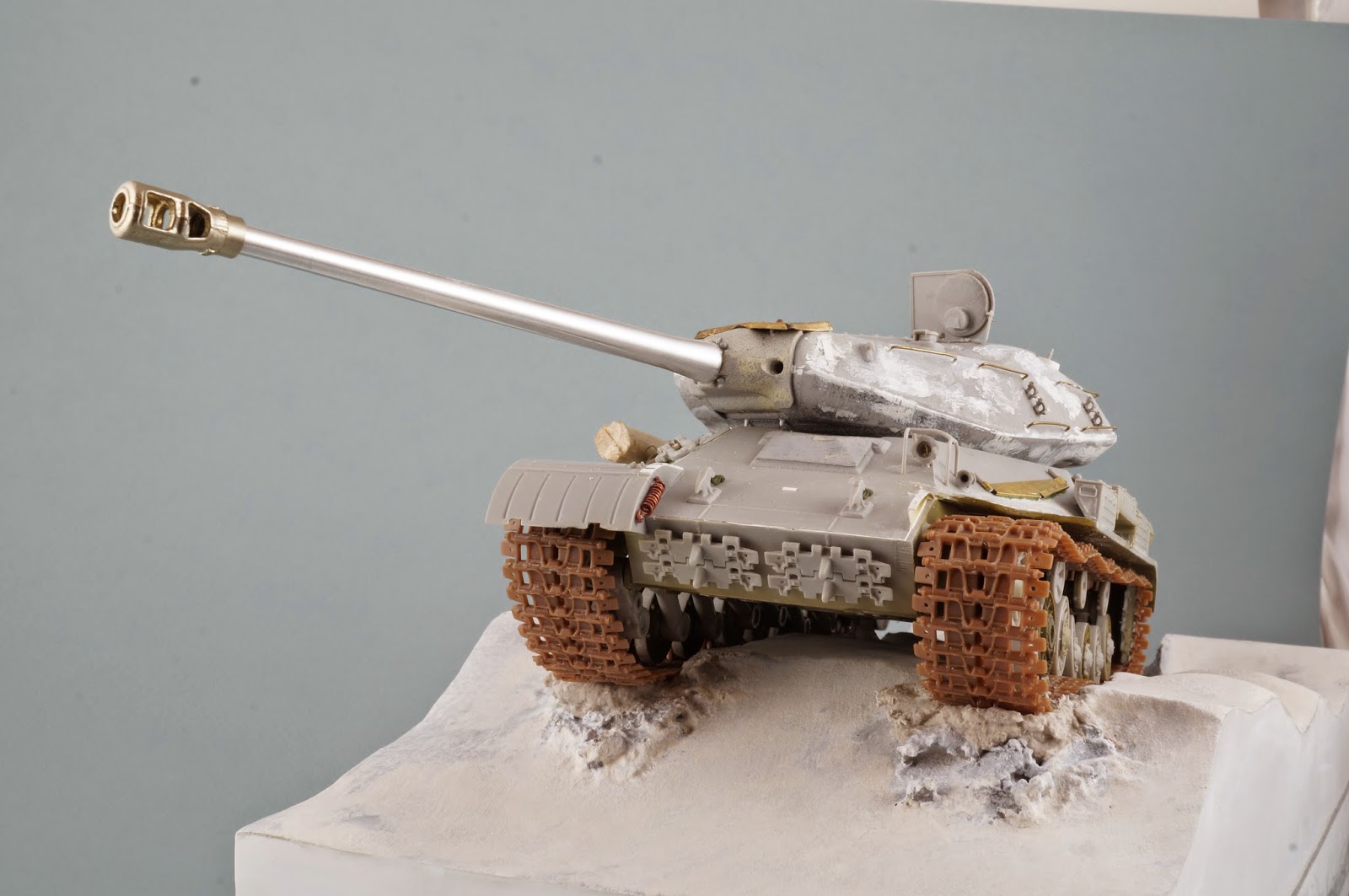 The kit got into my hands at the beginning of August, at which time the Trumpeter kit was still too new to have any aftermarket detail sets available for it yet. It's not that the kit really needed it, but I'm a sucker for shiny bits and there were one or two things I knew I wanted to change. After seeing Adam Wilder's phenomenal progress on his own IS-4, I mimicked his dented and bent mantlet hood (above the gun barrel on the turret roof) with a sheet of brass. I did the same for the damaged left-hand fender. I made some rough cuts on a wood dowel and attached it to the side of the model to replace the kit's comically poor plastic unditching log. I also added a lot of texture to the turret with a coarse metal rasp and a rotary bit. A little bit of putty helped tone down the effect. 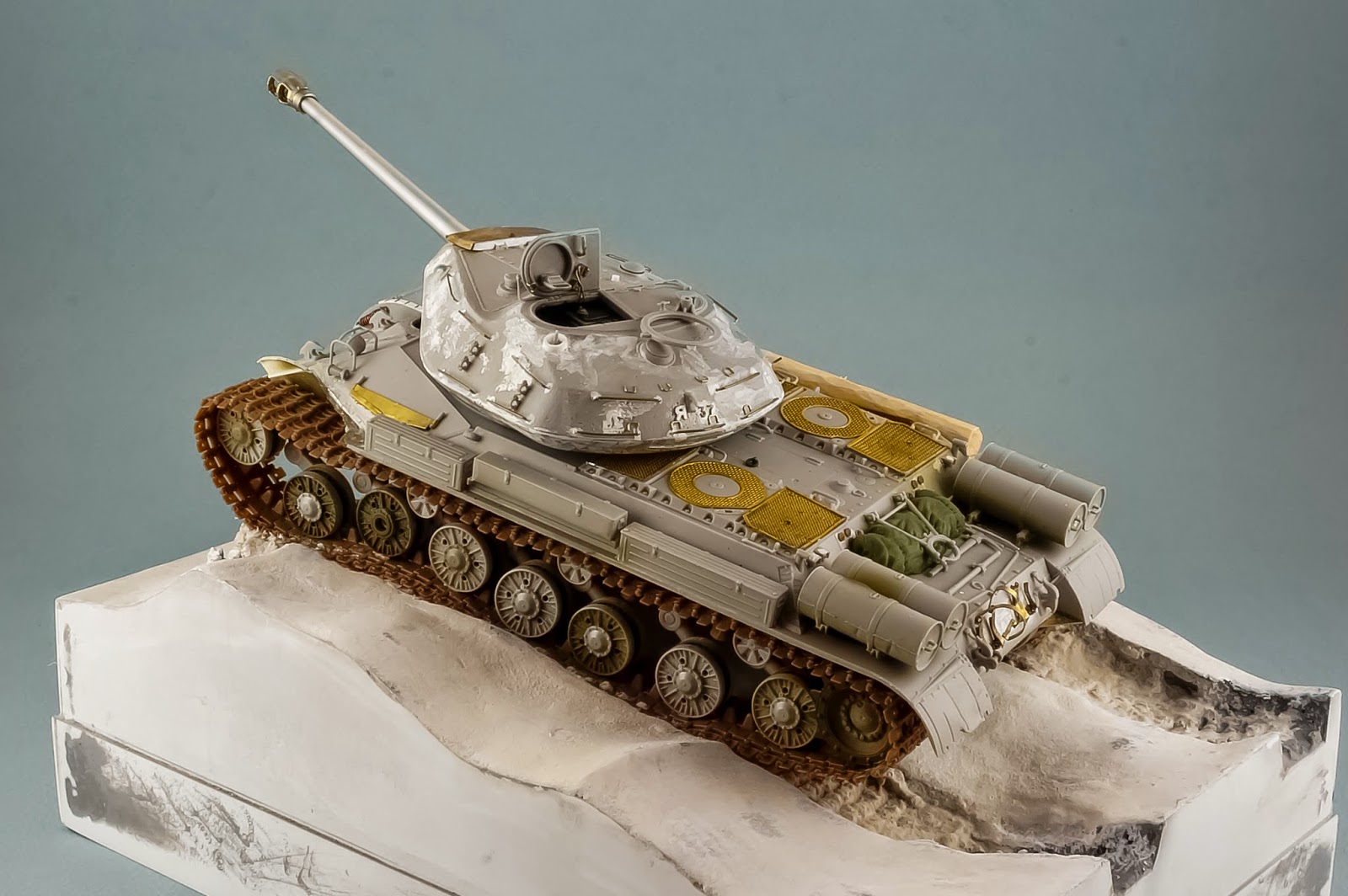 I used the photo-etched smoke barrel clamps from Eduard's JS-3 detail set, and then bent them out of shape to help disguise my shoddy soldering work. I also used the set's two-man saw and the electrical outlets on the inside of the commander's turret. I left the DShK anti-aircraft gun and its mount separate for painting. I replaced a ton of bolts on the rear engine deck, but I wound up covering most of them up with a rolled-up tarp to hide some clumsy mistakes. I sculpted the tarp from a 50/50 mixture of Apoxie Sculpt and Green Stuff, which seems to take on the best characteristics of each of its two ingredients. 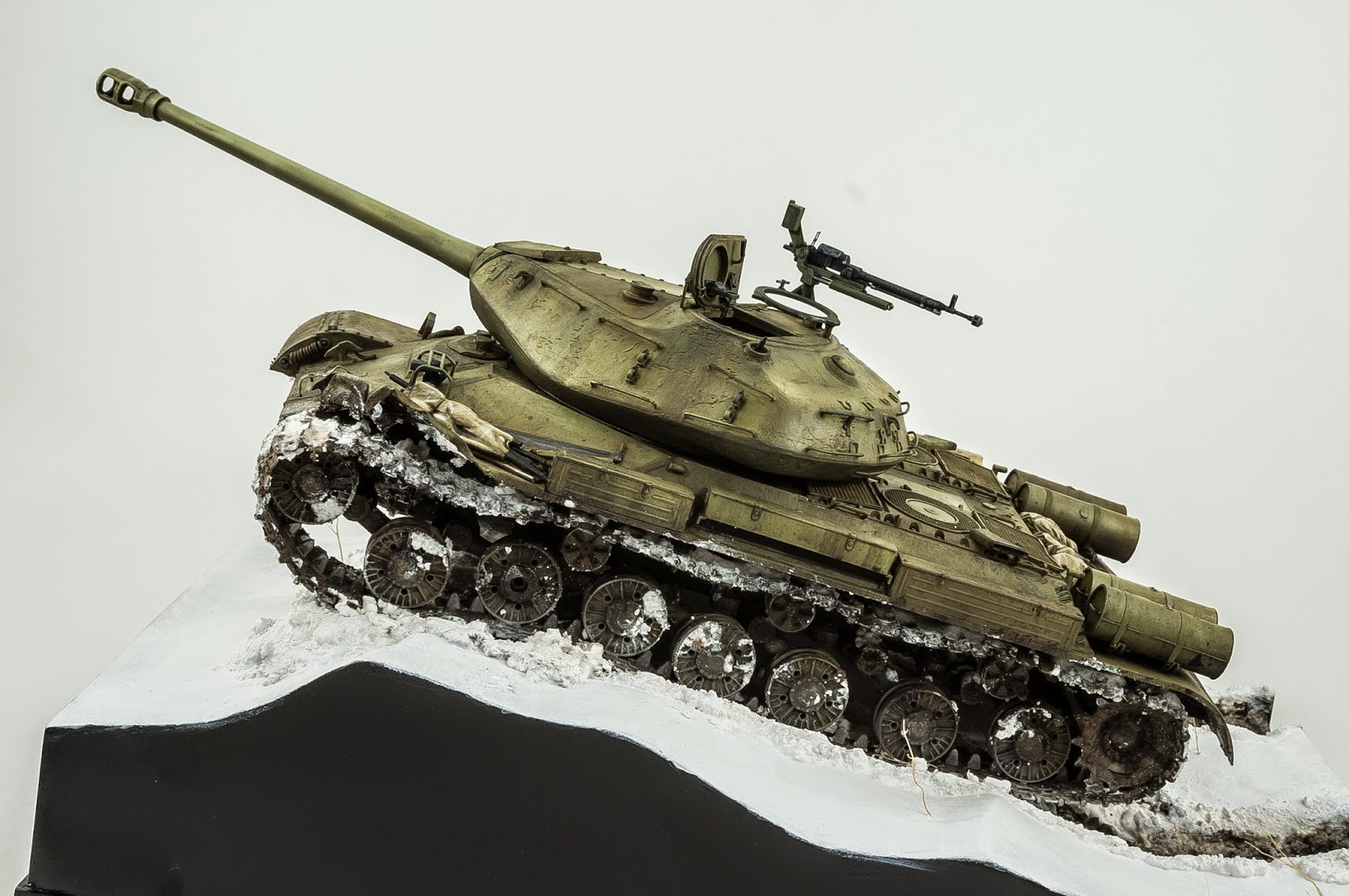 Okay, now for the thing everyone has been asking about: "How'd you make the base?" The short answer: laminated sheets of carved insulation foam.

The long answer is just that, long. I started out by drawing the cross-section view of the terrain I wanted on a piece of paper as my master template. (This is what the black area of the left-hand side of the base looks like now.) I then made a very similar template for the other side, but I made it a little bit shorter and moved it backwards towards the rear of the base to prevent the crest of the tallest snow drift from being at a perfect right angle with the edge. Next, I used a hot knife foam cutter to carve out six or seven slices of pink insulation foam in the shape of the original terrain template. When stacked upright like books, these slices formed the rough shape of the landscape I wanted to create. I cut out some troughs for the tracks of the tank to leave behind, and then glued the foam pieces together and set them inside the plastic box that makes up the base's side panels. The rest of the job was just a lot of sanding. A lot of sanding. I used foam-safe super glue, Woodland Scenics Foam Putty, and Mr. Surfacer 500 to fill the gaps and make the snow drifts flow smoothly. Celluclay was applied in the tank's muddy footprints to replicate mud, and then sloppily dolloped around the tracks to look like piles of snow thrown from the tracks. Originally, I glued microballoons to the entire surface, but this looked pretty bad so I sanded them off and painted everything white instead. 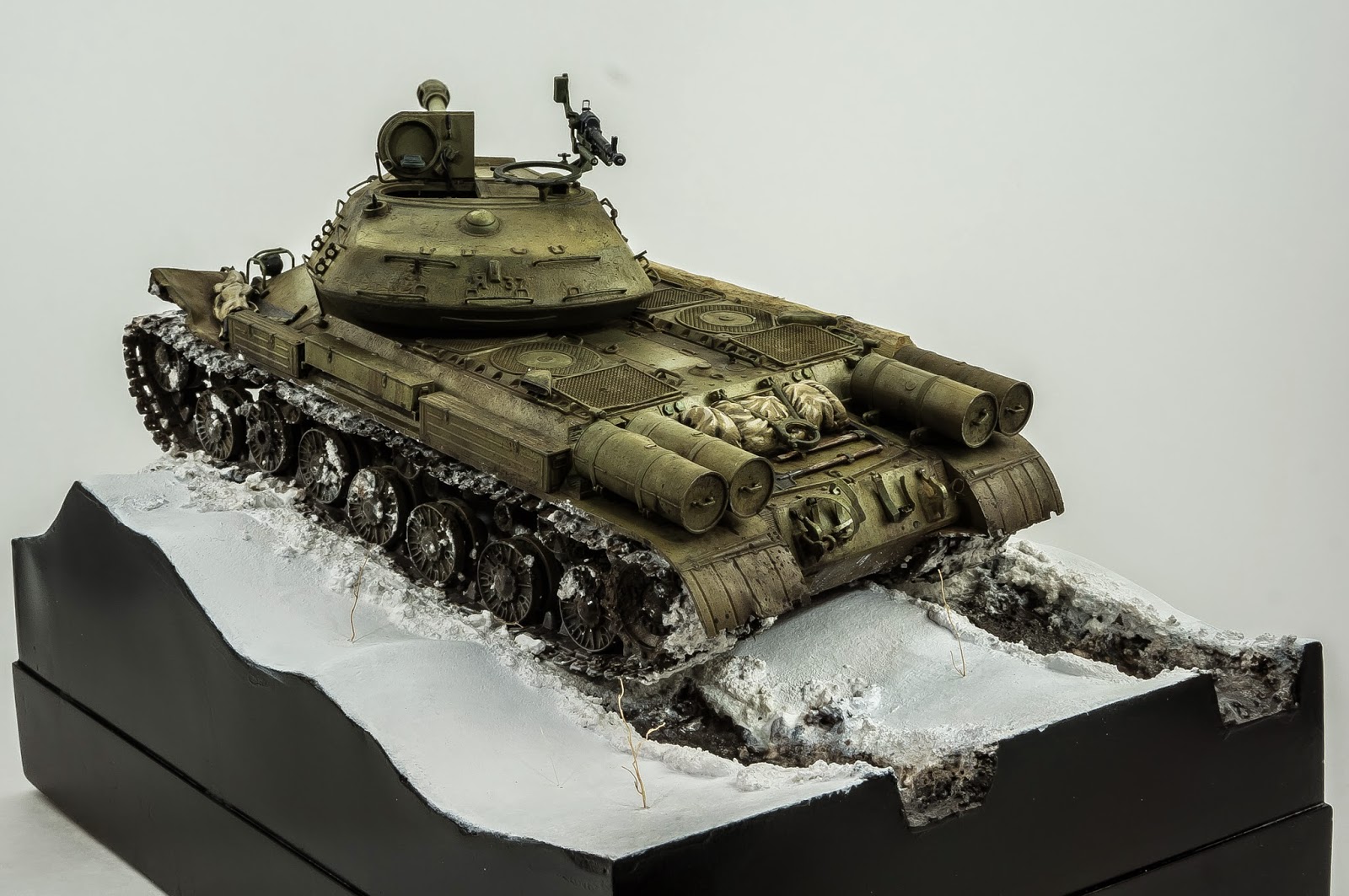 The base itself is made of plastic sheets cut to shape and glued together. Beneath the terrain at the bottom of the base, I secured a wooden block roughly in the center with a hold drilled through it, which will allow me to bolt the model to a carrying box for secure transport. It's not that I take models with me everywhere I go; it's mostly just something I always wind up wishing I had done. 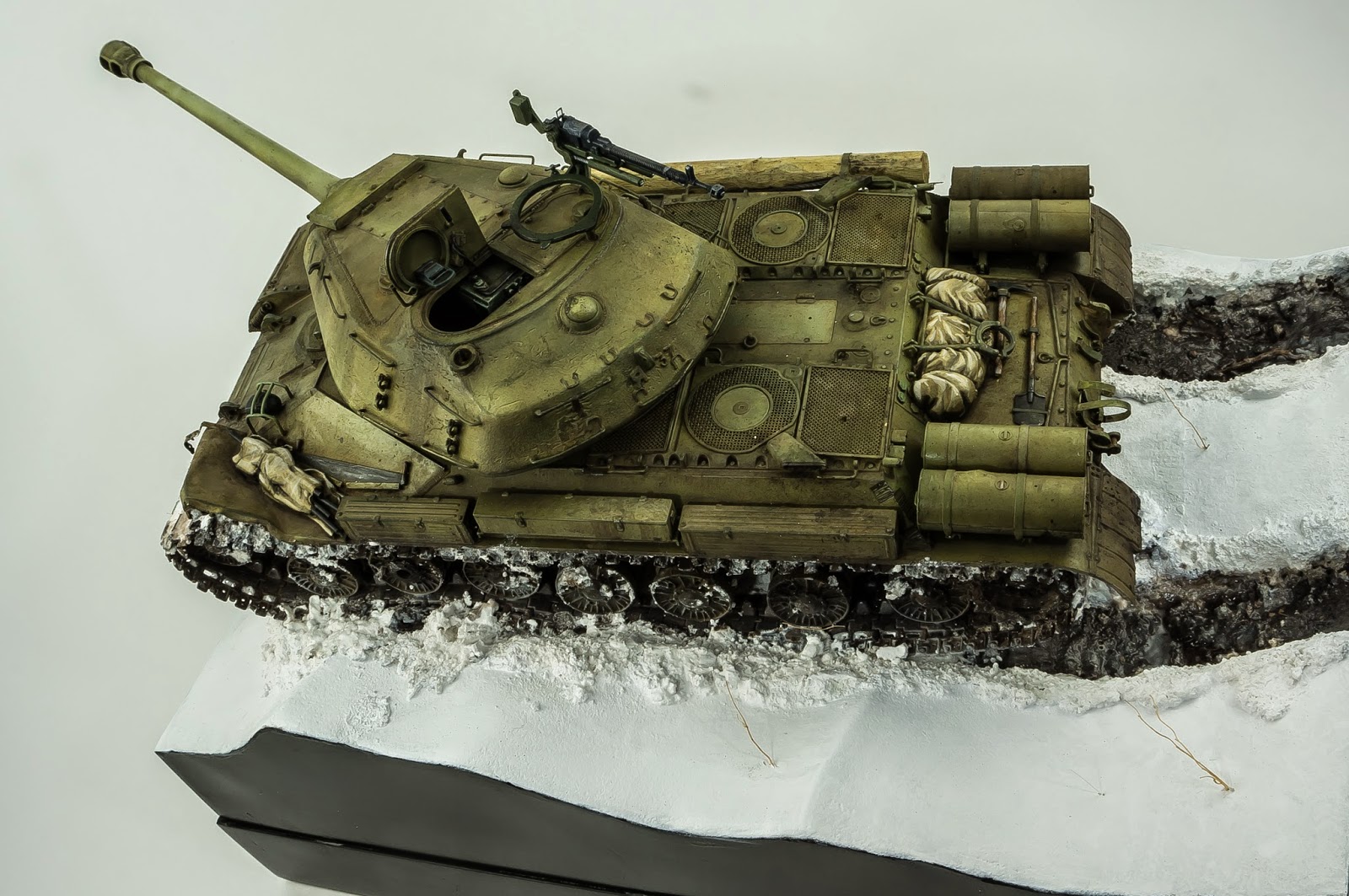 The back end of the turret shows my muted attempt at highlighting and shading. Oh, and check out the casting numbers at the back of the turret! They caused me way more headache than they were worth. I went looking through all sorts of kits in search of sprues with the size and fonts of letters/numbers that I wanted... Like I said, it was more trouble than it was worth. 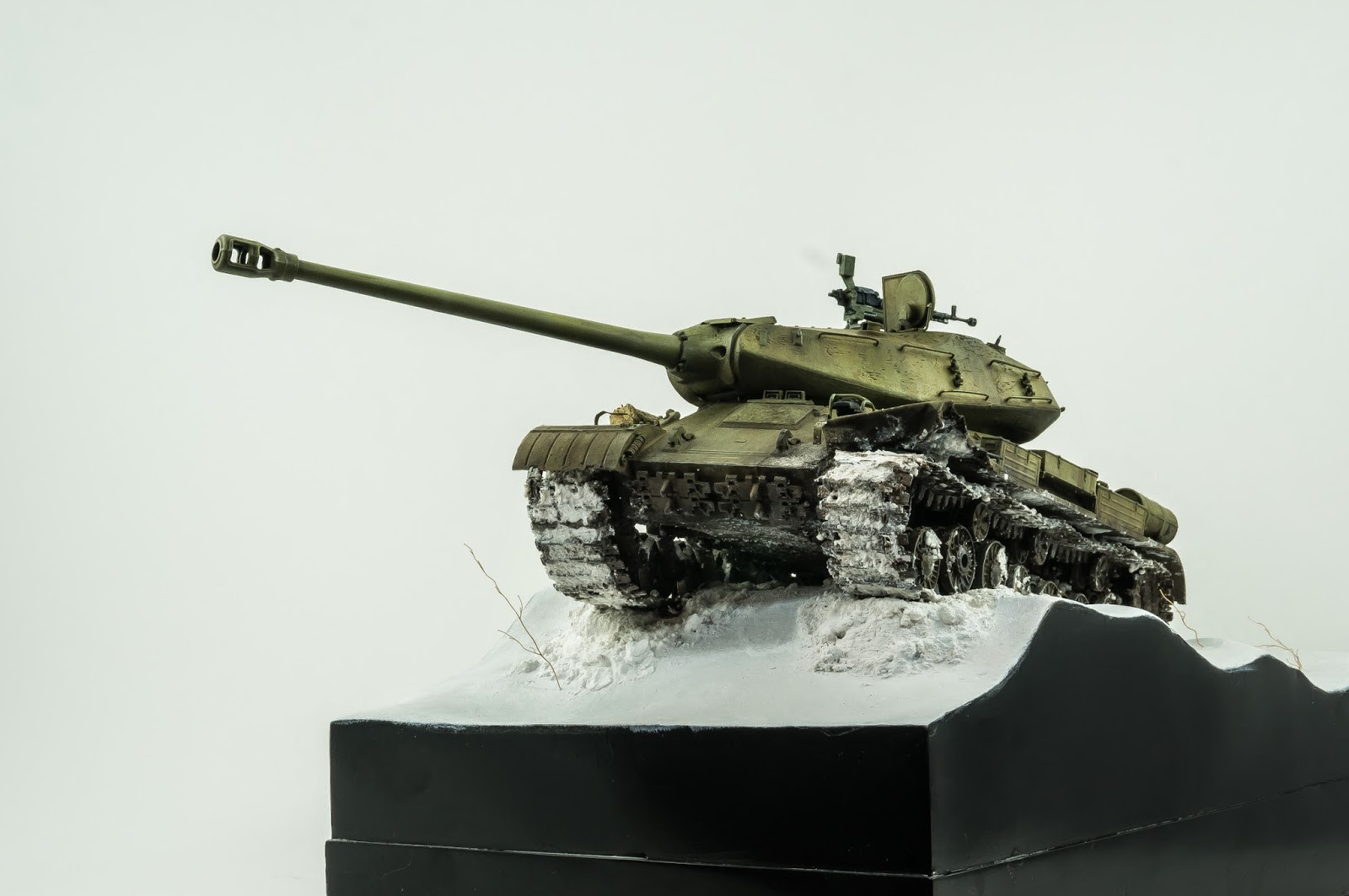 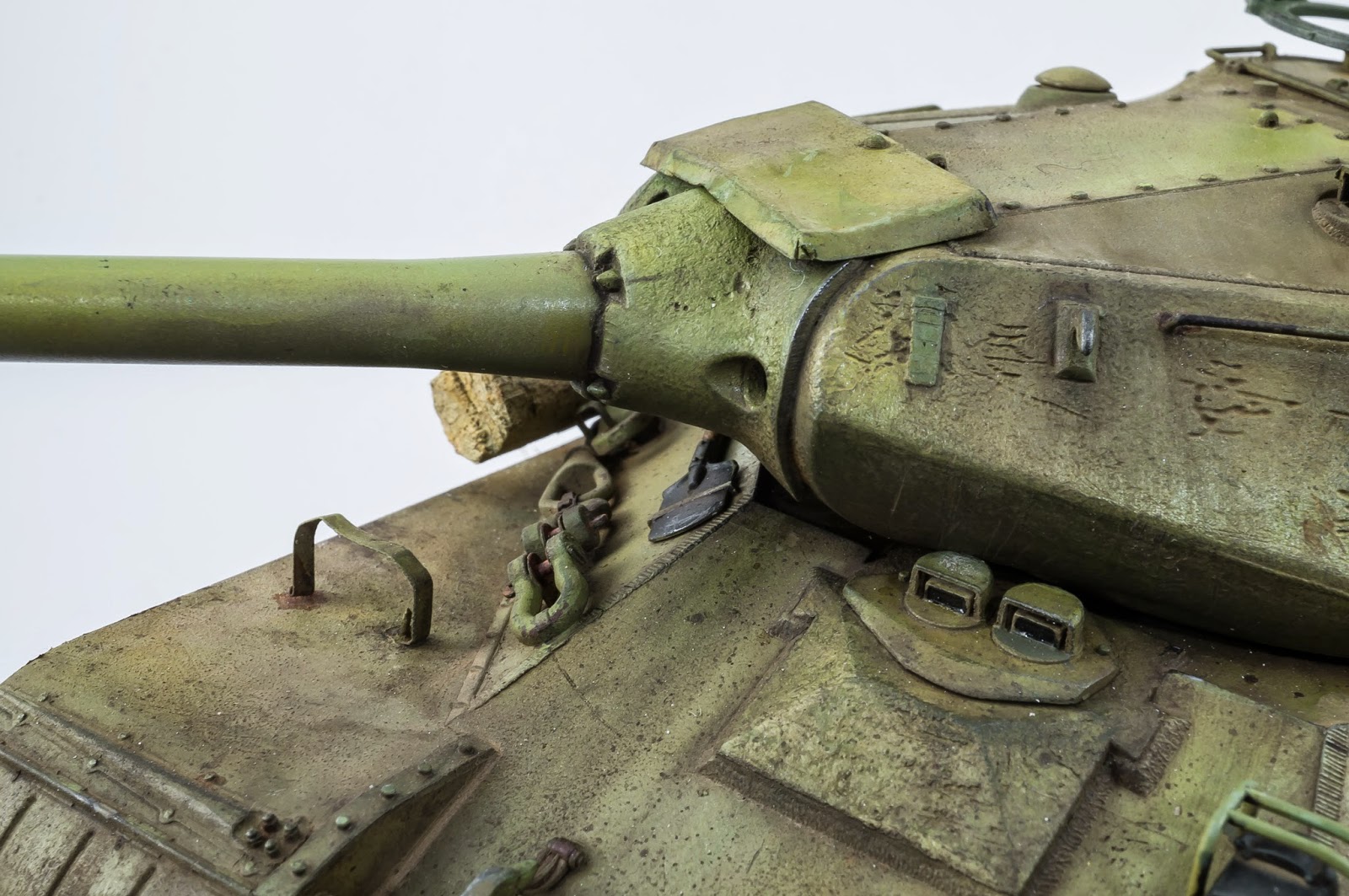 One of my favorite things about the IS-4 is the wide variety of textures you can find on it. The relatively smooth armor plates that make up the hull really clash with the rough sand-cast components on the turret and the little bulge on the front for the driver's hatch. I think, at the simplest level, that it is contrast that makes things visually interesting, so the more opportunities for contrast I can find on a model, the more interesting the model should be. The contrast doesn't have to just be in terms of color changes or stark, ultra-crisp pin washes, but also includes sheen, color, texture, and temperature. 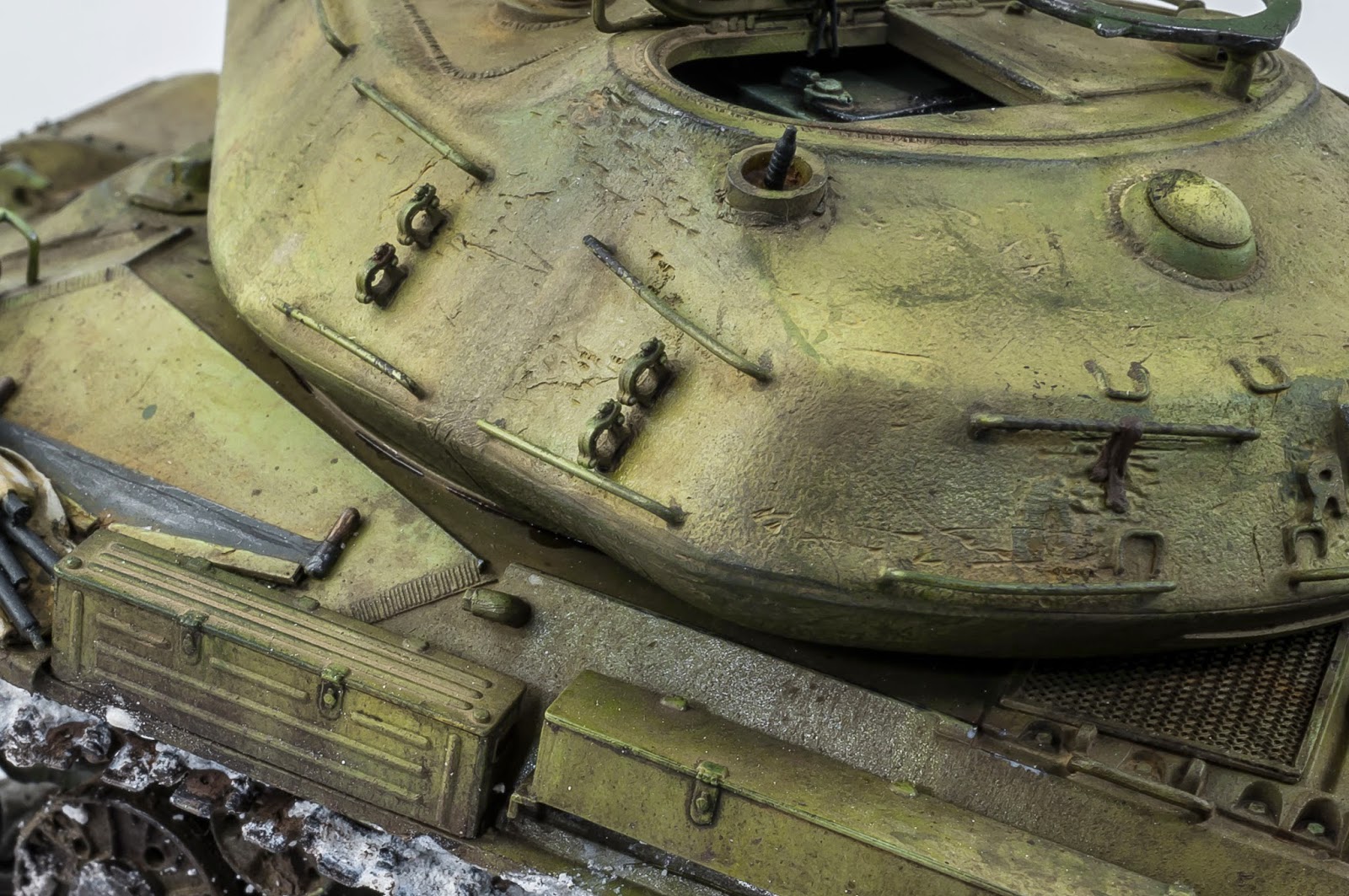 This picture really captures the texture and color changes that I had in mind when I started this project. Frankly, the picture looks much better than the actual model, but you have to promise not to tell anyone! 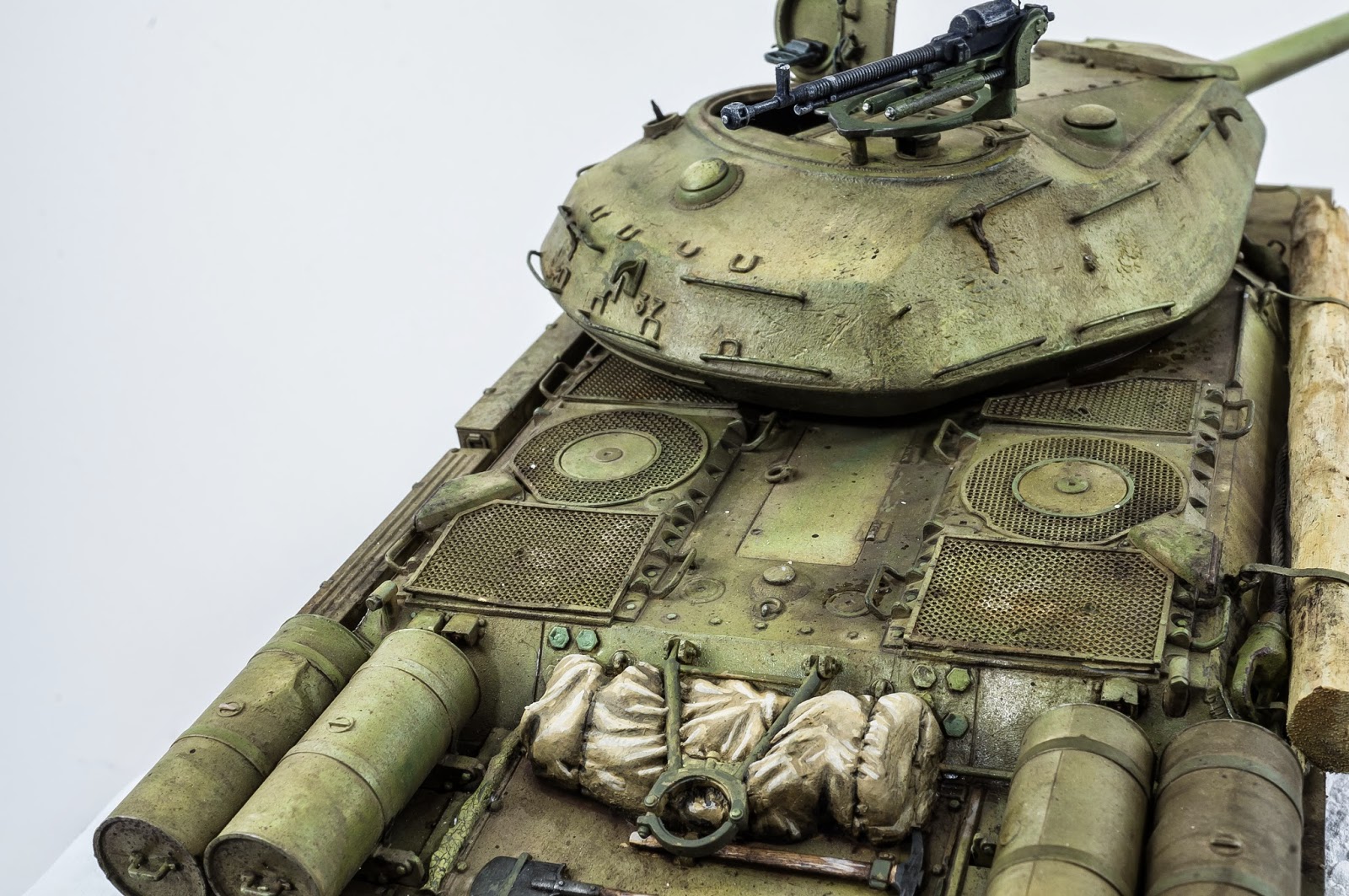 For some reason, Trumpeter decided to separate the photo etch screens from the frames that hold them in place. I soldered them together and secured them with super glue. Kinda an annoying extra step, but it's done now. 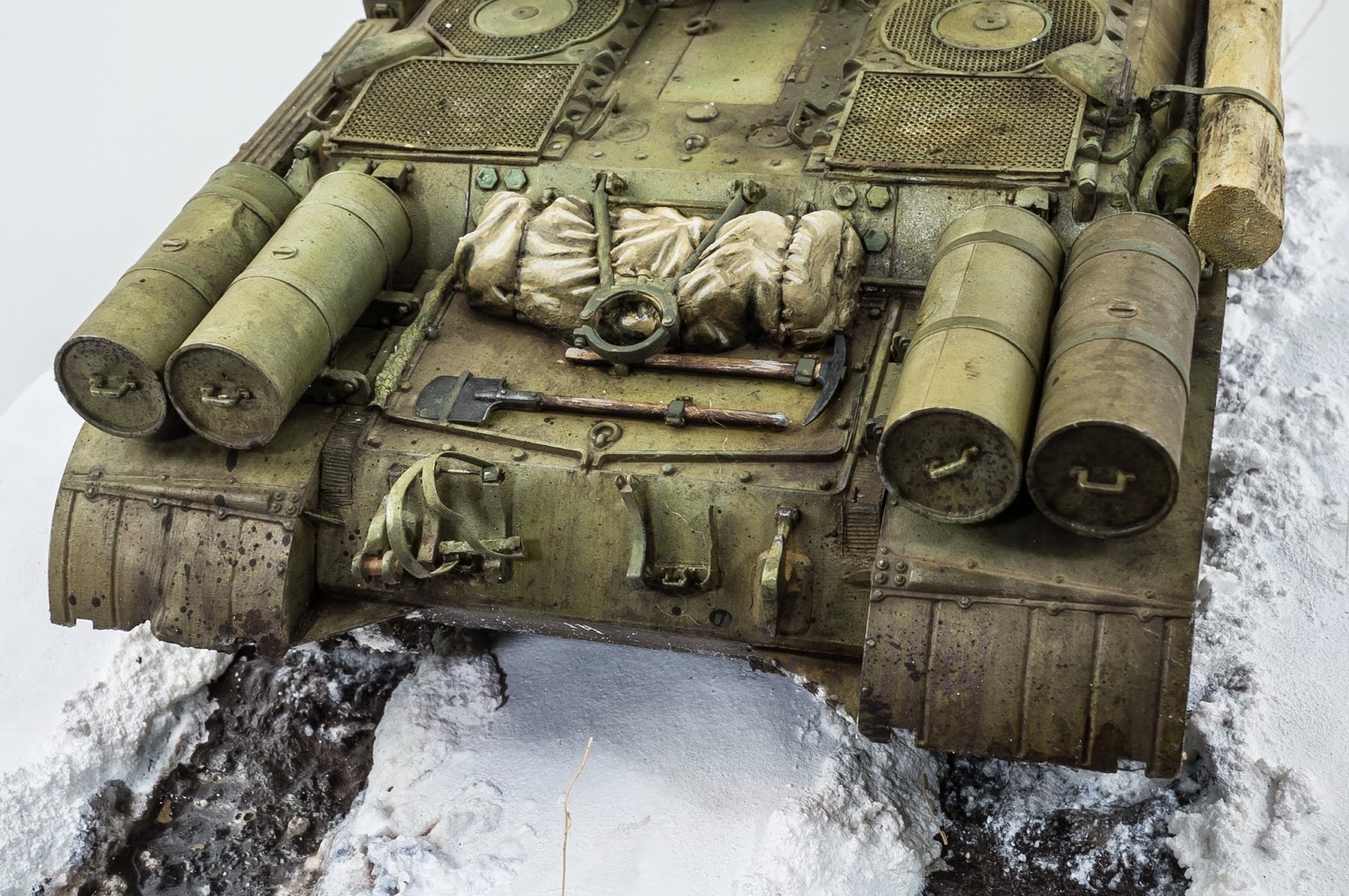 I did my best to make sure every one of the fuel drums looked a little bit different from the others. I even cut the handles off one and scribed new weld lines on it to make it look like it was mounted crookedly. To the left of the shovel, you can see the rubber seal sticking out between the engine deck cover and the side plate, which I made from a scrap piece of foil. Manufacturers seem to miss this detail quite often. 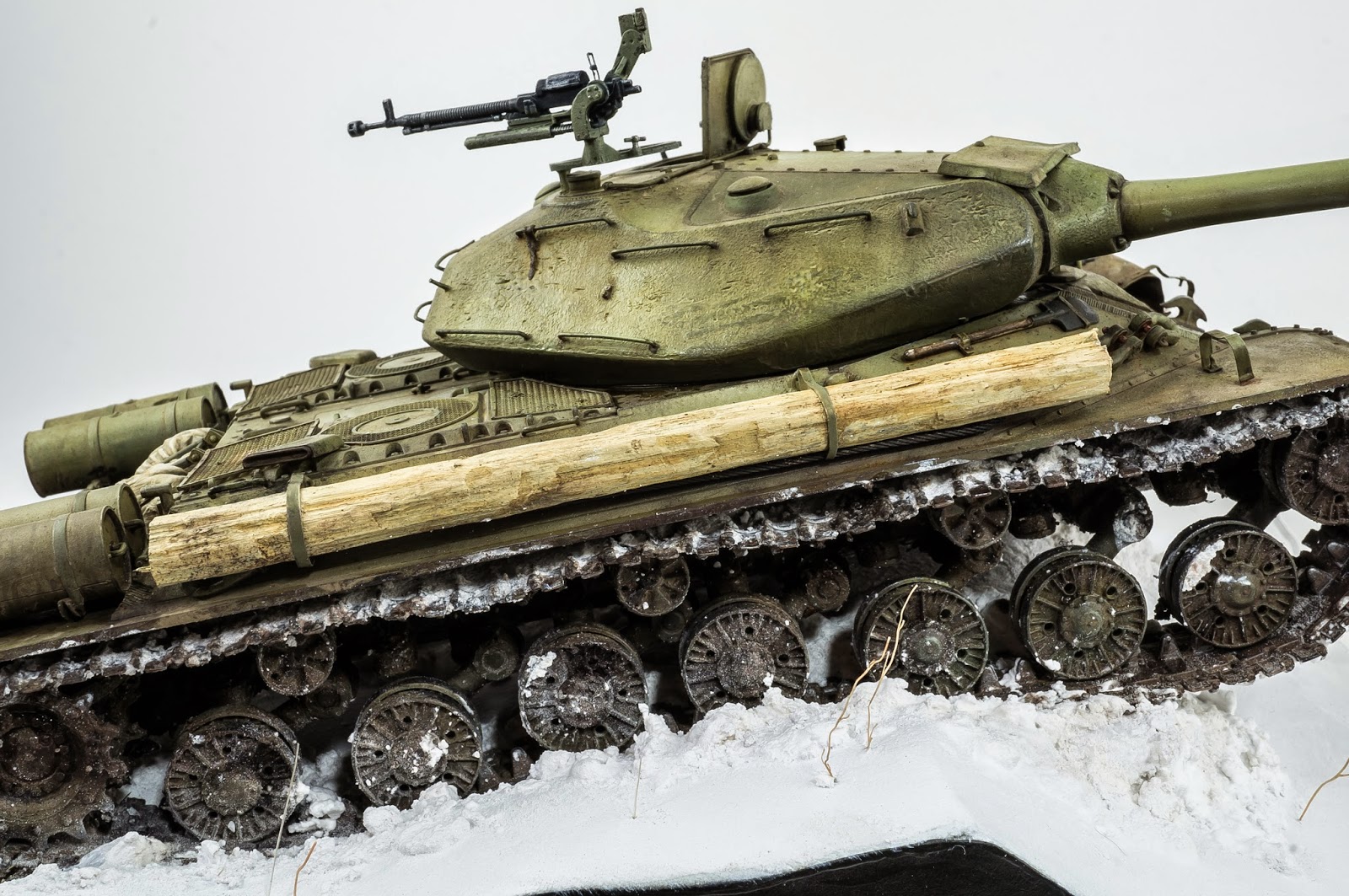 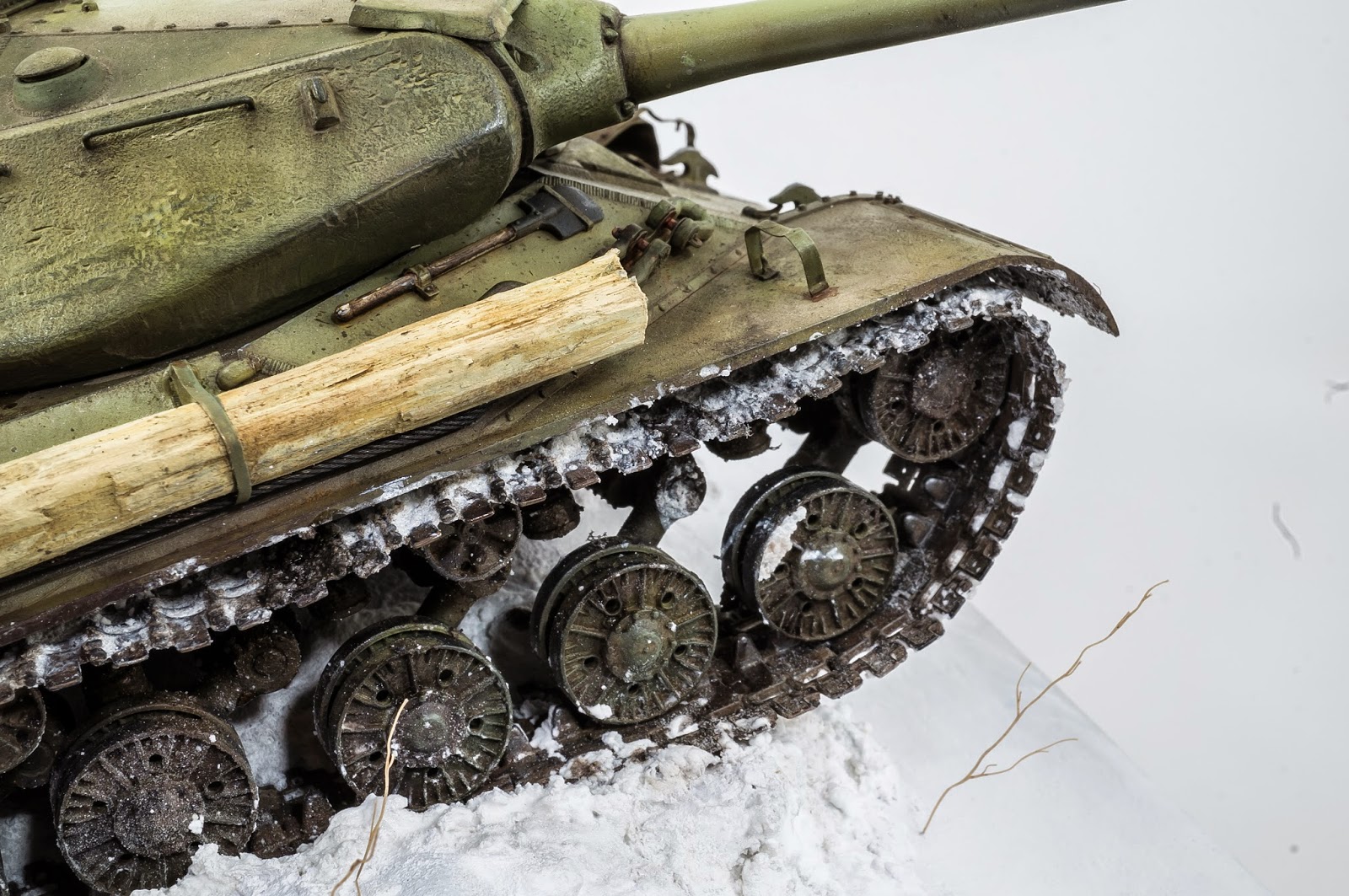 Here, you can see the little saplings and blades of grass that are peeking up through the snow drifts. Living in the snowier parts of the country has its advantages, I guess. I secured little pieces of shrubs from Armor Farm into small holes with a drop of white glue. (No, I'm not sponsored by Armor Farm or anyone else; I just want to show you where you can find better supplies!) 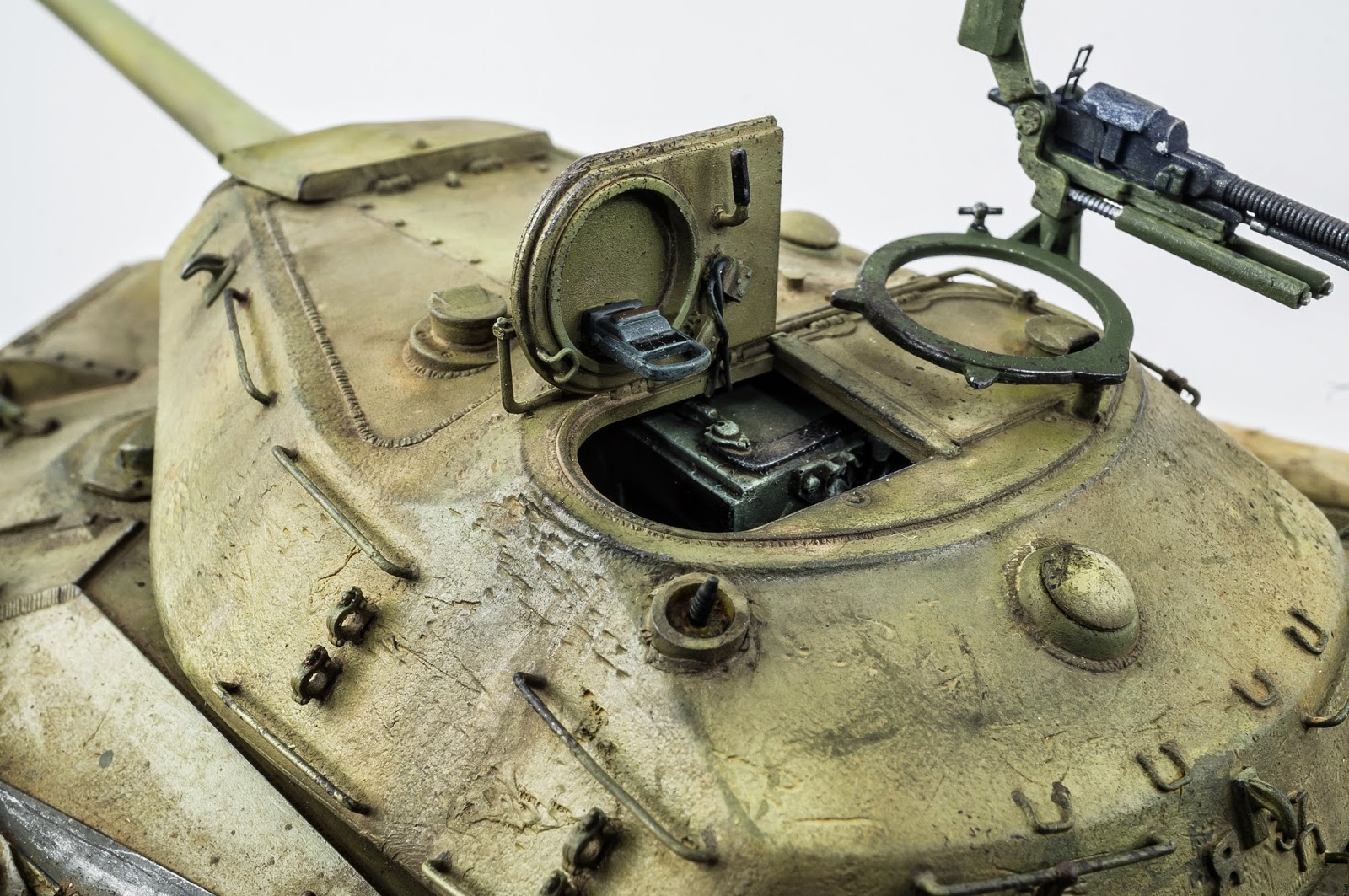 This close-up is pretty over-exposed, but I think it gives the best look of the "interior" that I can manage. I made a mistake and placed the gun breech too far to the rear of the turret, but only by a few millimeters. I used the breech from Jaguar's long-gone JS-2 interior set to fill out the sad, empty space in the turret. I keep thinking about adding a figure, but I haven't decided which one to use and I'm starting to think I should just move on to other projects instead. 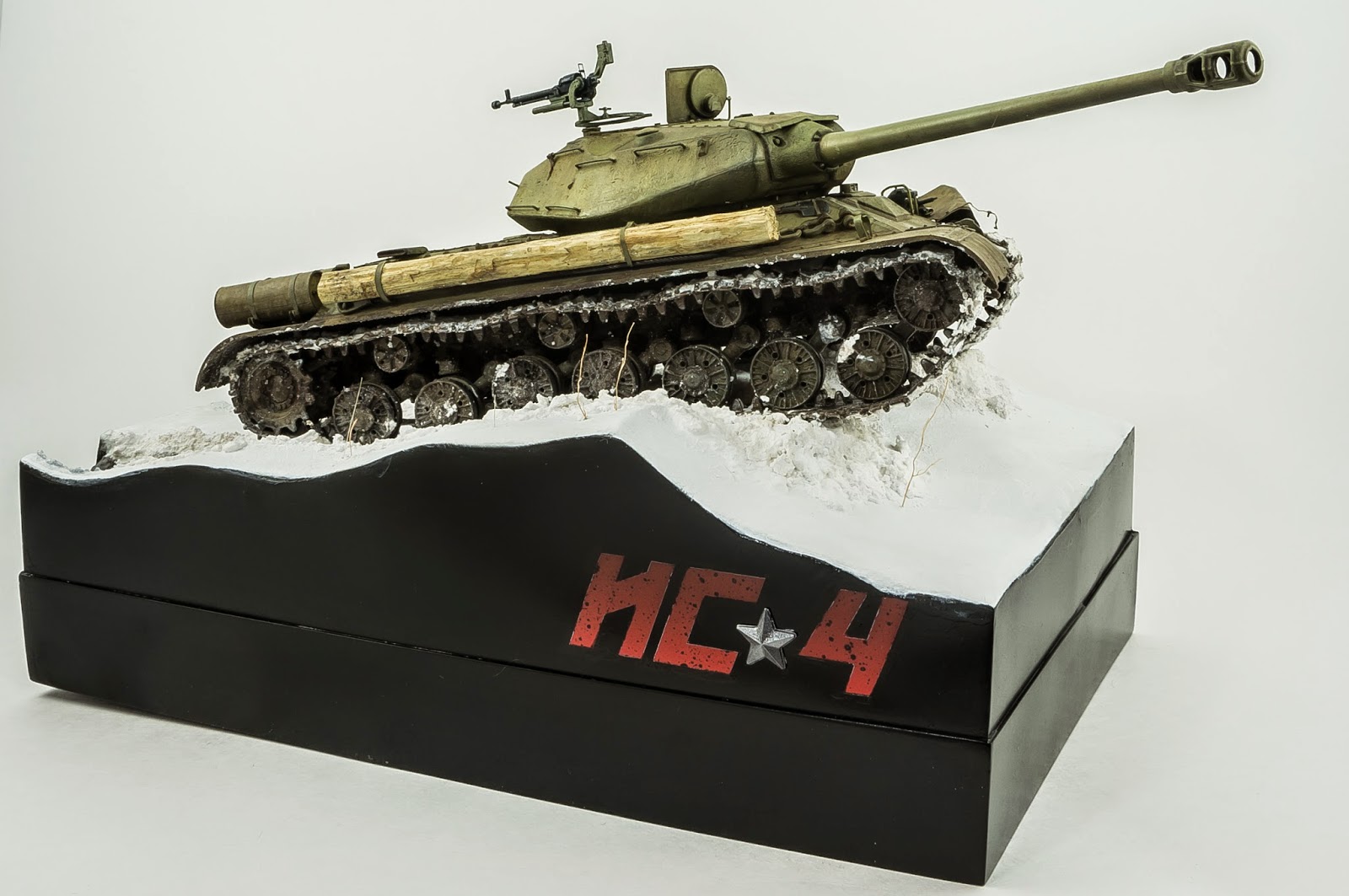 One thing I have been paying increased attention to on models in general is the nameplate. The usual go-to for many models is an engraved or printed metal plate from a trophy shop. This works, but it doesn't stand out, especially if you're at a model show with dozens of other people who did the same thing.

I used Tamiya's new paper sheet of masking tape to make a mask for the letters. I just printed them off from a word processing document onto the paper, cut out the letters, taped them on and painted away. The star is a little plastic jewel from a craft store painted in silver.