The Beast: Soviet T-55 in Afghanistan

I'm a big fan of the 1988 film "The Beast of War," also known as simply "The Beast." The movie follows the crew of a T-55 tank as it becomes lost in the Afghan mountains and pursued by the vengeful Mujahideen. The film uses an Israeli Ti-67 in place of a real T-55, which has a larger cannon and searchlight (among other things) than the T-55. But enough technical jargon, on to the model.

I set out to build the vehicle from the movie, but rather than building an Israeli Ti-67, I wanted to build a T-55 like the Soviets really used in Afghanistan. I began with the phenomenal 1/35th scale Tamiya kit,  adding photo-etched parts from Eduard, a metal barrel, Fruilmodel metal tracks, and fuel lines made from copper wire. 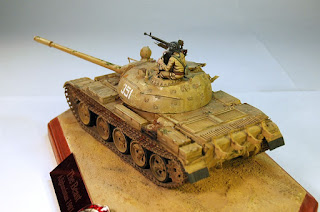 I painted the model with the Vallejo Model Air "Hemp" color. After picking out the details with other Vallejo colors, (tires, mudflaps, DshK machine gun) I started adding paint chipping, using a small brush and Vallejo "Iraqi Sand." In-between layers of the sand color, I would give some areas filters of grey, white, brown, and yellow oil paint. The last layer of chips were painted using an olive colored Vallejo paint, representing the green camouflage that would have been on the vehicle before it was re-painted tan for desert operations. 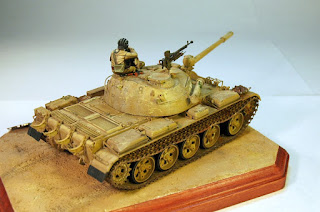 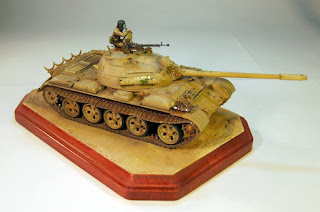 Mig Production's "Rainstreaks" were used extensively on the turret and front plate. Once dry, the solution is only slightly glossy. I really like this stuff. My photos don't accurately convey the effect.

The tank commander is a slightly modified ICM figure from their "Soviet Tank Crew 1979-1988" set. To re-create the opening battle scene, I used Apoxie sculpt to add a GP-4 gas mask and canister case, and then connected the two with a hose made out of a bass guitar string. I used a punch/die set to make the lenses, and thick aluminum foil to create the shoulder strap. I set an AKs-74u submachine gun from DML next to the hatch for a bit of color variation. The gun also received an aluminum sling. I used Vallejo acrylics exclusively on this figure, for the first time. I have used Winsor-Newton oil paints on all my figures until now, but I wanted to mix it up, and I'm glad I tried something new.
The base is Celluclay and sand, painted with acrylics. While the Celluclay was still drying, I pressed the Tamiya rubber-band tracks into the ground for the tread marks in the sand. Unfortunately, I measured the distance between the tracks incorrectly, and wound up making the space between the tracks too narrow! Like they say, "measure twice, cut once." Next time, maybe I'll pay better attention.
Thanks for looking, I hope you like it!
Labels: 1/35, Armored Vehicles, Cold War, Figures, Soviet-Afghan War, Vignettes, Weathering