This is Young Miniature's 1/10 "Black Devil" bust, depicting a Soviet naval soldier during WWII. I made essentially no modifications to the resin kit, aside from adding my own oak base. The Maxim MG belts came in four 4cm sections, which needed to be dipped in boiling water and pressed into shape around the torso. This was much easier than I expected, but still somewhat troublesome. 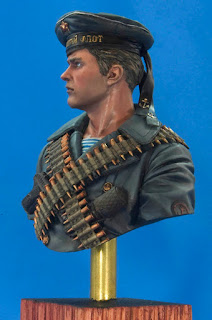 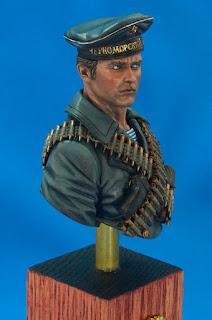 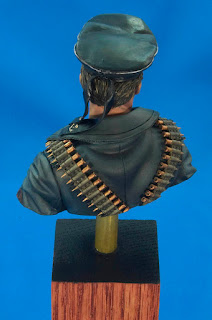 I painted the model using a basecoat of acrylic paint, followed with highlights and shading using custom-mixed Winsor-Newton oil paints. I painted the head and neck separate from the torso, to avoid getting black paint on the skin and fleshy paint on the uniform.

Thanks to Sean for help with the photos! Let me know what you think.
Labels: Busts, Figures, Great Patriotic War